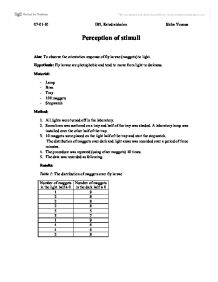 Aim: To observe the orientation response of fly larvae (maggots) to light. Hypothesis: Fly larvae are photophobic and tend to move from light to darkness.

Perception of stimuli Aim: To observe the orientation response of fly larvae (maggots) to light. Hypothesis: Fly larvae are photophobic and tend to move from light to darkness. Material: - Lamp - Bran - Tray - 100 maggots - Stopwatch Method: 1. All lights were turned off in the laboratory. 2. Some bran was scattered on a tray and half of the tray was shaded. A laboratory lamp was installed over the other half of the tray. 3. 10 maggots were placed on the light half of the tray and start the stopwatch. ...read more.

X2 = 23.04 is higher than the critical values at 5%, therefore, the null hypothesis can be rejected; implying that with 95% certainty the distribution of fly larvae is not even in the two regions. As comes from figure 1, approximately 3/4 of the maggots show a negative phototaxis i.e. tend to move to the darker region, while 1/4 of the maggots tend to exhibit a positive phototaxis i.e. tend to stay in the light. It could, thereby, be concluded that the result obtained holds true for the hypothesis made. ?? ?? ?? ?? 07-01-10 IB3, Katedralskolan Shiba Younus ...read more.