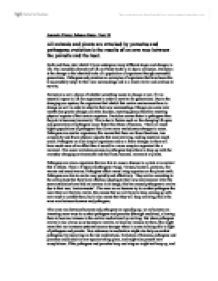 All animals and plants are attacked by parasites and pathogens; evolution is the results of an arm race between the parasite and the host

Amanda Chong- Science Essay- Year 10 All animals and plants are attacked by parasites and pathogens; evolution is the results of an arm race between the parasite and the host. Earth and those who inhabit it have undergone many different stages and changes in life. The incredible diversity of life on Planet Earth is all due to evolution. Evolution is the change in the inherited traits of a population of organisms through successful generations. Pathogens and parasites are examples of organisms that have been able to successfully adapt to their new surroundings and in a result evolve and continue to survive. Evolution is not a choice of whether something wants to change or not, if it an essential aspect in life for organisms in order to survive for generations. Due to the changing eco-system, the organisms that inhabit that certain environment have to change as well in order to adapt to their new surroundings. Change can occur over months but greater changes can take decades, mutating genes, therefore mutating physical aspects of that certain organism. ...read more.

Over the years antibiotics have had an increase in its usage, this has caused pathogens to evolve due to their new 'environments'. The more we as humans try to combat pathogens the more they are likely to evolve, this means that we will have to keep coming up with new ways to combat them, but it also means that they will keep evolving, this is the arms race between humans and pathogens. This arms race between humans and pathogens are speeding up, we as humans are inventing more ways to combat pathogens and parasites (through medicine), allowing them to become immune to the certain medications by evolving. But when pathogens evolve it also allows us as humans to involve, to become immune to them, this might mean that our immunes systems become stronger when it comes to being able to fight of pathogens and parasite. New advances in medication might also help us combat pathogens; by improving on the last medications. Evolution of humans, pathogens and parasites could result in new species taking place, and might also present new compilations. ...read more.

But soon after this, the antibiotic usage in Switzerland increased from 1.4% to 45%, and when the surveys were taken again between 1991 and 1993, 28% of the strains tested were resistance to this antibiotic. This shows how quickly a pathogen or parasite can evolve and become immune to the antibiotics. Antibiotic resistant pathogens are widespread, quick and they learn from our mistakes. In Atlanta, a 1994 study of infections caused by Streptococcus pneumonia found that 25 percent of 431 patients had a bug that resisted penicillin, and that 25 percent of all cases were resistant to several antibiotics. Once resistance develops, all offspring of that bacterium get it. In conclusion, As long as we humans keep consuming and inventing new antibiotics to combat pathogens and parasites, we are allowing them to evolve and become immune to that antibiotic. This arms race between pathogens, parasites and humans will continue on, unless one gives up. Anytime bacteria are exposed to an antibiotic, they are under "selective pressure" that allows only resistant forms to survive and reproduce. So the basic rule is to decrease our over all antibiotic usage, therefore slowing down the evolution of resistance strains. The arms race between pathogens, parasites and humans is the result of evolution. ...read more.