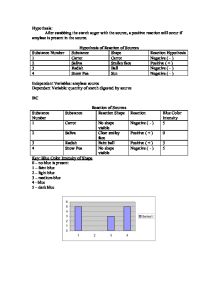 The main problem with the experiment was the crushing of the substance that was swabbed. The availability of the mortar and pistol was meek and so sufficient time for grinding the sources was not available to the experimenter. The substance was ground up for different periods of time and so the availability of the source within the water added to the mortar could have been smaller. This could have greatly affected the experiment because when the substance was swabbed onto the auger using a Q-Tip and collecting the source from a solution of water and source, there could have been different levels of source and water being swabbed onto the amylase. The concentration of the source, therefore, could have been greater or less, and so this could have caused a greater, smaller, faster, or slower reaction of the amylase in the substance on the starch in the auger. Another problem that was evident in the experiment was that the iodine that was used was not diluted enough to allow the digested starch show through the dark blue iodine. ...read more.