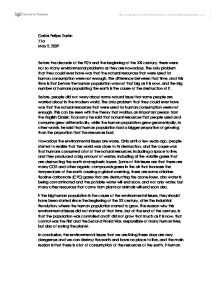 An alternative solution to environmental issues

Carlos Felipe Dur�n 11a May 2, 2009 Before the decade of the 90's and the beginning of the XXI century, there were not so many environmental problems as they are nowadays. The only problem that they could ever have was that the natural resources that were used for human consumption were not enough. The difference between that time, and this time is that before the human population was not that big as it is now, and the big number of humans populating the earth is the cause of the destruction of it. Before, people did not worry about some natural issue that some people are worried about in the modern world. ...read more.

Nowadays the environmental issues are worse. Only until a few years ago, people started to realize that the world was close to its destruction, and the cause was that humans consumed a lot of the natural resources, including a space to live, and they produced a big amount of wastes, including al the volatile gases that are destructing the earth stratospheric layers. Some of this issues are that there are many CO2 and other organic compounds gases in the air that increase the temperature of the earth causing a global warming, there are some chlorine-fluorine-carbonate (CFC) gases that are destructing the ozone layer, also water is being contaminated and the potable water will end soon, and not only water, but many other resources that come from plants or animals will end soon also. ...read more.

it did not grow that much as it is now, that control was the First and the Second World War, responsible of many human lives, but also of saving the planet. In conclusion, the environmental issues that we are living these days are very dangerous and we can destroy the earth and have no place to live, and the main reason is that there is a lot of consumption of the resources of the earth. If human population goes down, the consumption will also go down and the earth and other animals that live on it will be saved. In other words, a Third World War or any natural catastrophe will be good to save the earth. ...read more.