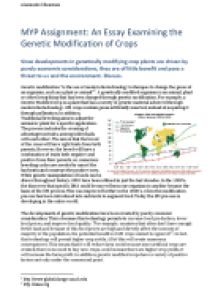 An Essay Examining the Genetic Modification of Crops

﻿Alessandro Marazzani MYP Assignment: An Essay Examining the Genetic Modification of Crops Since developments in genetically modifying crop plants are driven by purely economic considerations, they are of little benefit and pose a threat to us and the environment. Discuss. Genetic modification ?is the use of modern biotechnology techniques to change the genes of an organism, such as a plant or animal?[1]. A genetically modified organism is an animal, plant or other living thing that has been changed through genetic modification. For example, a Genetic Modified crop is a plant that has a variety of genetic material achieved through modern biotechnology. GM crops contain genes artificially inserted, instead of acquiring it through pollination. In addition, Traditional breeding aims to adjust the animal or plant for a specific application. The process includes the crossing of advantageous traits, among individuals, with each other. The aim is that the breed of the cross will have right traits from both parents. However, the breed will have a combination of traits both negative and positive from their parents, so, numerous breeding cycles are needed to cancel the bad traits and construct the positive ones. ...read more.

In addition, genetic modified crops have a variety of positive factors not only under the economical point. These ?first generation? crops have confirmed the ability to lower farm-level production costs. Now, research aims attention on ?second-generation? GM crops that will include the increase of nutritional and industrial characteristics, therefore it will enrich the food in term of properties. Also, These crops will have more direct benefits to consumers. For example, because of this technology rice can be added with iron, vitamins E and A and with lysine. This will benefit the human health. In addition, potatoes will contain higher inulin content and starch. There is the possibility to enrich edible vaccines in maize, banana and potatoes, in order to improve the quality of the food. Phytic acid in maize can be swapped with amino acids, which are very positive for the body. Besides, healthier oils can be inserted in soybean and canola. There is the possibility for the creation of allergen-free nuts. All of these benefits can consequently bring to social benefits of the population. In fact, if the prices are lower and the quality of the food is improved, it will bring to more competition between food companies, therefore more products will be available on the market. ...read more.

It is the responsibility of the scientists, producers, and the government to make certain that the public safety of the novel foods that they offer. In addition, they will also need to control its effect on the environment. There is also the existence of risks that cannot be caused or able to be averted by the technology itself. ?An example of this sort of risk is the further opening up of the economic gap between developed countries, which utilise the technology, and developing countries, which are nonusers?[4]. These risks, however, can be controlled by establishing technologies adjusts made for the needs of the less developed countries and by establishing laws so that the less fortunate will have access to these new technologies. In conclusion, Genetic modified crops have both negative and positive factors. In my opinion, I believe that the factors of this technology are very good in all the campus of social, economical and environmental campus. However, the main problem is that this technology is new therefore we don?t know the risks. So, I believe that this technology will be very useful in the future, when first scientist will have studied better Genetic Modified crops. ...read more.