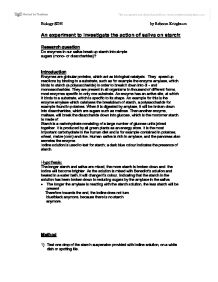 An experiment to investigate the action of saliva on starch:

An experiment to investigate the action of saliva on starch: Research question Do enzymes in our saliva break up starch into simple sugars (mono- or disaccharides)? Introduction Enzymes are globular proteins, which act as biological catalysts. They speed up reactions by binding to a substrate, such as for example the enzyme amylase, which binds to starch (a polysaccharide) in order to break it down into di- and monosaccharides. They are present in all organisms in thousand of different forms, most enzymes specific to only one substrate. An enzyme has an active site, at which it binds to a substrate, which is specific to its shape. An example for this is the enzyme amylase which catalyses the breakdown of starch, a polysaccharide for example found in potatoes. When it is digested by amylase, it will be broken down into disaccharides, which are sugars such as maltose. Then another enzyme, maltase, will break the disaccharide down into glucose, which is the monomer starch is made of. Starch is a carbohydrate consisting of a large number of glucose units joined together. It is produced by all green plants as an energy store. ...read more.

* 3) What conclusion can you draw from the results of the tests in steps 9 and 10? - The solution turns brick red. That means that the starch in the solution has been broken down to reducing sugars by the amylase in the saliva. * 4) What test should you perform on the original starch suspension before you can be confident of your answer to question 3? -Iodine test to see if starch has completely been broken down. If it turns black blue, starch is still present! * 5) How are the properties of saliva affected by boiling? - The enzyme amylase in saliva is denatured and so the starch in the saliva stays unchanged * 6) Saliva normally acts on starch at body temperature (37�C). If you had carried out the whole experiment at this temperature, what difference would you expect this to have made to the results you obtained? -The results would have been much faster. The colour would change much faster for example from blue/black directly to navy blue or dark purple instead of changing much slower. (as shown in the result table) The experiment would be much faster to do and to finish. Biology-SDH by Rebecca Kriegbaum ...read more.