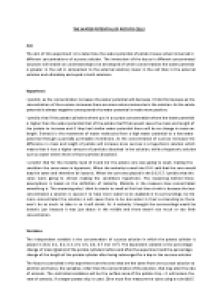 An experiment to show the water potential of potato cells

Moreover, I will control the temperature, because if the temperature is warmer for one experiment, this will speed up the process of osmosis. [I’ll use room temperature to maintain the same set temperature for each experiment performed and use a thermometer to monitor this.] Apparatus * Cork borer * 1 Potato – so it’ll be the same age and species * White tile - Do all cutting on a white tile; therefore I will not damage anything. * 2 Measuring cylinders * Paper towels - to clear up any spillages quickly and to place the potato chips on after taking them out of the sucrose solutions * Top pan balance (±0.01g) * Ruler (±0.5mm) * Stopwatch Method 1. From the 1.0M sucrose solution prepare 20cm3 of each of the following concentrations and put them into a series of labelled test tubes: 0.7M, 0.6M, 0.5M, 0.4M, 0.2M, 0.1M and 0.0M. 1. Using a cork borer (ensure you have the same size one throughout) cut potato chips 40mm long, making sure the ends are cut square and they will fit in to a test tube. ...read more.

To improve this, I should have used a fair drying method to remove the water outside the surface of the potato. If I allowed them all to dry for five minutes and then measured the mass, maybe my results would have been more accurate. Other methods such as using a hairdryer etc. would incur more human error. I could have used a narrower range of solute concentration to find the point of no mass change and length more precisely for example 0.1M, 0.125M, 0.15M, 0.175M, 0.2M, 0.225M, 0.25M, 0.275M, 0.3M, 0.325M, 0.35M, 0.375M, 0.4M. Moreover, I carried out all of the experiments assuming that that the room temperature remained constant and that each experiment was carried out at the same temperature. I should have implemented a way of controlling the temperature. Using a water bath could have done this. As soon as I placed the potato into the sucrose solution, I covered all of the test tubes, with paper towel in order to prevent any water to be lost via evaporation, as this would make the solution more concentrated. However, the paper towel could have caused humidity, which could have affected the results. So instead of using cling film I could have used light proof sheets, which would have also stopped variations in light intensity affecting the results. ...read more.