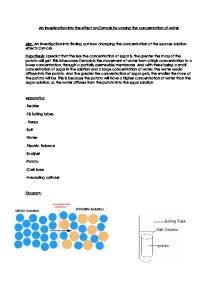 As the molar concentration decreases, the greater the percentage change in mass becomes, this is because with the molar concentration decreasing, the water concentration increases having more water diffusing into the potato than out. From the graph you can see that with the molar concentration being 1, the percentage change in mass is the greatest, because the solution is packed with salt molecules and so much more water diffuses into the solution than into the potato. Evaluation The graph showed in the results is what I predicted would happen, so this suggests that the experiment was fairly accurate. The accuracy of the investigation was adequate, but when each potato was damp dried to get rid of excess water, each potato was not was not necessarily done the same, and they were dried a more accurate way it could improve the accuracy of the experiment. Doing three trails for each solution increased the accuracy, but for at least one trial in each concentration there was an anomalous result, that was that was over 5% greater. ...read more.