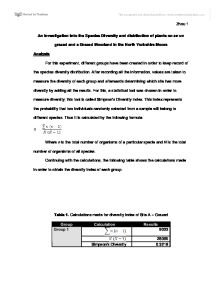 An Investigation into the Species Diversity and distribution of plants on an un grazed and a Grazed Moorland in the North Yorkshire Moors Analysis For this experiment, different groups have been created in order to keep record of the species diversity distribution. After recording all the information, values are taken to measure the diversity of each group and afterwards determining which site has more diversity by adding all the results. For this, a statistical tool was chosen in order to measure diversity; this tool is called Simpson's Diversity Index. This index represents the probability that two individuals randomly selected from a sample will belong to different species. Thus it is calculated by the following formula: Where n is the total number of organisms of a particular specie and N is the total number of organisms of all species. Continuing with the calculations, the following table shows the calculations made in order to obtain the diversity index of each group. Table 1. Calculations made for diversity index of Site A - Grazed Group Calculation Results Group 1 9033 28056 Simpson's Diversity Index 0.3219 Group 2 1818 8190 Simpson's Diversity Index 0.2219 Group 3 3915 10920 Simpson's Diversity Index ...read more.

Simpson's Diversity Index for Site B - Not Grazed Group Diversity Index Group 1 0.2344 Group 2 0.2384 Group 3 0.2365 Group 4 0.4251 Group 5 0.2313 Group 6 0.2099 Total 1.5756 Just to remind, the hypothesis stated were that there will be greater species diversity on the grazed Moorland because the sheep will add nutrients to the soil due to their waste or there will be less species diversity on grazed Mooreland because the sheep will eat certain plant species such as Calluna Vulgaris and leave others. As seen in the results, it appears that there is a smaller average percentage and species diversity on the Grazed Mooreland since it counts with 6 different species and in the Mooreland that is not used for grazing appeared 9 different species. This might mean that the grazing does not affects the species diversity on each land, however other variables such as other animals or the different nutrients on the soil of each site were not considered. Therefore, the species diversity results might seem affected from a beginning. Evaluation Many important variables were not taken into consideration from the beginning. ...read more.

Also, the habitat should be monitored within other organisms to identify whenever there is a fluctuation on the species diversity, it may have been caused by other organisms or natural disasters. As during the experiment, data collection should be standardized and the same perception of each group in order to realize the percentage will allow more accurate results. Conclusion In conclusion, Hypothesis B seems to be more proper since there is less species diversity on the grazed land, which automatically discards Hypothesis A. Yet this results are not completely certain since other factors were not considered such as a other wildlife that may have caused fluctuations on the species diversity, human activity that may have eliminated part of some species or even the sheep that might had step on the species, harming and ending with them. However, this experiment can further be realized again, yet more factors should be considered such as sunlight accessibility, human actions, and external factor like water from other sources. Data collection must be standardized and exact values must be used instead of rounding. In addition that a small research of the historical background of the moorlands may help for a better distribution of groups. ?? ?? ?? ?? Zhou 1 ...read more.