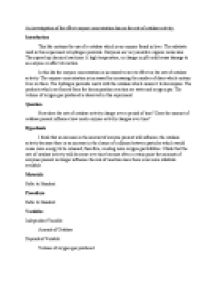 ﻿An investigation of the effect enzyme concentration has on the rate of catalase activity Introduction This lab contains the use of a catalase which is an enzyme found in liver. The substrate used in this experiment is hydrogen peroxide. Enzymes are very sensitive organic molecules. They speed up chemical reactions. A high temperature, or change in pH could cause damage to an enzyme or affect its motion. In this lab the enzyme concentration is increased to see its effect on the rate of catalase activity. The enzyme concentration is increased by increasing the number of discs which contain liver on them. The hydrogen peroxide reacts with the catalase which causes it to decompose. The products which are formed from the decomposition reaction are water and oxygen gas. The volume of oxygen gas produced is observed in this experiment. Question How does the rate of catalase activity change over a period of time? Does the amount of catalase present influence how much enzyme activity changes over time? Hypothesis I think that an increase in the amount of enzyme present will influence the catalase activity because there is an increase in the chance of collision between particles which would cause more energy to be released, therefore, creating more oxygen gas bubbles. I think that the rate of catalase activity will decrease over time because after a certain point the amounts of enzymes present no longer influence the rate of reaction since there is no more substrate available. ...read more.

This shows that when an enzyme is first added to the reaction it causes a large increase on the rate of catalase activity. Therefore my hypothesis is supported by my data results because the data shows the increase in rate of catalase activity caused by the increase in enzyme concentration; and the rate of catalase slowly decreases since there are more enzymes then substrates available. This lab was limited because of the various different amounts of liver which were on the filter paper discs, this would affect the volume of oxygen gas produced because it would cause there to be more or less liver. When comparing some of the volumes of oxygen gas produced there is a large difference in the volumes recorded which could have been affected by the difference in temperature To prevent the uncertainty in the amount of liver on the paper discs the person who executing the experiment could be more methodical in their actions. For example they could put the paper discs in the beaker of liver for fifteen seconds and do the same for all the paper discs. Then they could decide to wipe the sides of filter paper twice to get rid of excess liver. By doing this there is less uncertainty in the difference of amount of liver on the filter paper. In addition, a thermometer could be first put into the water in the trough before doing the experiment to reduce the effect temperature on the rate of reaction. This is especially important since temperatures can cause a reaction to occur quicker since there is more energy in particles which causes them to move faster (http://edquestscience.com/pdf/PS-TE-2notes.pdf). ...read more.