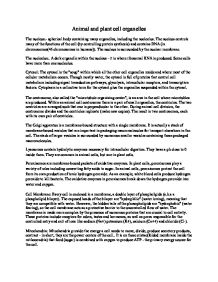 Animal and plant cell organelles The nucleus:- spherical body containing many organelles, including the nucleolus. The nucleus controls many of the functions of the cell (by controlling protein synthesis) and contains DNA (in chromosomes(46 chromosomes in humans)). The nucleus is surrounded by the nuclear membrane. The nucleolus:. A dark organelle within the nucleus - it is where ribosomal RNA is produced. Some cells have more than one nucleolus. Cytosol: The cytosol is the "soup" within which all the other cell organelles reside and where most of the cellular metabolism occurs. Though mostly water, the cytosol is full of proteins that control cell metabolism including signal transduction pathways, glycolysis, intracellular receptors, and transcription factors. Cytoplasm is a collective term for the cytosol plus the organelles suspended within the cytosol. The centrosome, also called the "microtubule organizing center", is an area in the cell where microtubles are produced. Within an animal cell centrosome there is a pair of small organelles, the centrioles. ...read more.

Cell Membrane: Every cell is enclosed in a membrane, a double layer of phospholipids (a.k.a a phospholipid bilayer). The exposed heads of the bilayer are "hydrophilic" (water loving), meaning that they are compatible with water. However, the hidden tails of the phosopholipids are "hydrophobic" (water fearing), so the cell membrane acts as a protective barrier to the uncontrolled flow of water. The membrane is made more complex by the presence of numerous proteins that are crucial to cell activity. These proteins include receptors for odors, tastes and hormones, as well as pores responsible for the controlled entry and exit of ions like sodium (Na+) potassium (K+), calcium (Ca++) and chloride (Cl-). Mitochondria: Mitochondria provide the energy a cell needs to move, divide, produce secretory products, contract - in short, they are the power centers of the cell.. It is on these cristae(folded membrane inside the mithocondria) that food (sugar) is combined with oxygen to produce ATP - the primary energy source for the cell. ...read more.

The smooth endoplasmic reticulum is so named because it appears smooth by electron microscopy. Smooth ER plays different functions depending on the specific cell type including lipid and steroid hormone synthesis, breakdown of lipid-soluble toxins in liver cells, and control of calcium release in muscle cell contraction. Rough Endoplasmic Reticulum: Rough endoplasmic reticulum appears "pebbled" by electron microscopy due to the presence of numerous ribosomes on its surface. Proteins synthesized on these ribosomes collect in the endoplasmic reticulum for transport throughout the cell. Ribosomes are the site of protein synthesis.. Messenger RNA from the cell nucleus is moved systematically along the ribosome where transfer RNA adds individual amino acid molecules to the lengthening protein chain. Cytoskeleton: As its name implies, the cytoskeleton helps to maintain cell shape. But the primary importance of the cytoskeleton is in cell motility. The internal movement of cell organelles, as well as cell locomotion and muscle fiber contraction could not take place without the cytoskeleton. The cytoskeleton is an organized network of three primary protein filaments. Nucleus Nucleolus Centriole Golgi apparatus Lysosome Peroxysome Vesicle Cell Membrane: Mitochondria Vacuole: Cell wall: Chloroplast: SER RER Ribosomes: Cytoskeleton: ...read more.