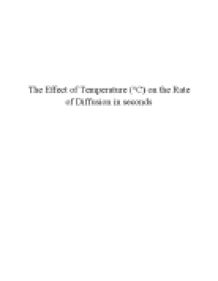 So by diffusion, the missing nutrients flow inside from high region of concentration to the inside of the cell that has a low region of concentration (Campbell, 2005). Limitations and suggestions for improvements Limitations Methods for improvement The temperature of the food colouring was not known. The temperature should be constant because if the temperature of the food colouring is high or low then it will affect the temperature of the water and affect the rate of diffusion. This limitation could be improved by simply storing the food colouring before doing the experiment in a room temperature area for a day. For 100°C, the water was measured before boiling it. The water should be measured after boiling it because water evaporates when boiled. The control variable, same amount of water, can fluctuate. This limitation can be improved by boiling more than needed so if water does evaporate, the needed amount can still be collected. A 500ml beaker can be used to measure the water. The temperature of the surrounding where the experiment was taking place was not controlled. For example if the temperature of the surrounding is too cold then the hot water can quickly lose its heat. A precise digital thermometer such as Calicos can be used to make sure the room’s temperature is between 22 to 23 C°. Works Citied 1. Campbell, Neil A., and Jane B. Reece. Biology. San Francisco: Pearson, Benjamin, Cummings, 2005. Print. 2. Ruth Richardes. “Movement of Materials across Cell Membrane." http://highered.mcgraw-hill.com/sites/dl/free/0072439440/60317/exercise3.pdfPaul 67-54. 3. Campbell, Andrew A, and David M. Biology Course Companion. Oxford University Pres. New York, 2006. Print ...read more.