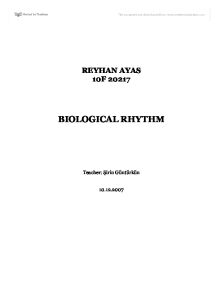 Biological rhythms. In order to say that such a clock exists, it is essential to show that periodic behaviors really are internal not triggered by external cues such as the changes in light levels, temperature, and relative humidity.

REYHAN AYAS 10F 20217 BIOLOGICAL RHYTHM Teacher: Sirin G�nt�rk�n 10.12.2007 Introduction Many squirrels hibernate every year, many birds migrate south for the winter, and crickets start their mating calls each day before sunset. Many plant activities, like transpiration and synthesis of certain enzymes, happen within the course of a day. But what drives these cycles of behavior is the organisms' internal clocks that help govern behavior on time scales that run from a few minutes to a year. In order to say that such a clock exists, it is essential to show that periodic behaviors really are internal - not triggered by external cues such as the changes in light levels, temperature, and relative humidity. To prove that these conditions are not effective on internal clocks, biologists have done their researches on lab conditions, where the animals can be isolated from any environmental cue. Even in this artificially constant conditions, many physiological processes continue to oscillate with their periodicities. For instance, many legumes lower their leaves in the evening and raise them in the morning. A bean plant will continue these "sleep movements" even if kept in constant light or constant darkness; the leaves are not simply responding to sunrise and sunset.1 Another example is the male teleogryllus cricket, who continue to chirp nearly 11 hours per day and start every bout of calling approximately 25 or 26 hours after the end of the previous bout, in lab conditions where temperature is held constant and light kept on about a clock. The point here that this biorhythmic behaviors are prompted by an internal clock and will continue in a fairly fixed way in the absence of any environmental cause. Such physiological cycles with a frequency of about 24 hours and are not directly paced by any known environmental variable are called circadian rhythms. (From the Latin circa, approximately, and dies, day) Figure 1: Circadian rhythm, a graphic depiction of cortisol values over a 24-hour period. ...read more.

Insomniacs have been known to complain about being unable to close their eyes or "rest their mind" for more than a few minutes at a time.17 It is a problem that affects a great many people. Besides some other reasons that can bring in insomnia, like depression or chronic anxiety, changes in one's daily routine is the most common cause of insomnia. For instance, travel, starting a new job or a new semester, going into hospital, sleeping in a strange environment, moving into a new home, and anxiety over job interviews or tests are some possible causes of insomnia. MONDAY MORNING BLUES: Our behavioral activities are governed by artificial cycles of light, whereas our physiological activities are governed by natural cycles. 18Therefore, modern life applications give us the chance to wake before dawn, or sleep late after sunset. When we stay much later on Saturday night, sleep much later on Sunday morning, we suffer the consequences on Monday morning when our biological clock is desynchronized. Such minor problems about sleep is also very common among people. At least, we can say that many people claim that they don't sleep enough or effectively. They claim mostly that the time they slept is less than needed. Here a question occurs. How can we realize a relationship between the number of hours slept and the soundness of the sleep? For average, a normal sound sleep shouldn't be less than 6 hours and more than 9 hours. 19 Which means that sound sleep doesn't only have a minimum limit but also a maximum limit. Another major advice on sleep is to sleep at the same time every night which will regulate our internal clock, as sleep-wake cycle is a major issue of biological rhythm. Therefore it can be hypothised that the number of hours slept should be parallel to our biological rhythm for us to have a sound sleep. ...read more.

Some of these time may not even be remembered. o Investigation has a very limited time of data collection. Two weeks doesn't even make up for some circles of human body (for instance it doesn't include a full menstrual cycle which might be effective on the results). It should have been at least a full month or better longer. The longer the investigation, the better results we obtain. o This investigation was made on a high school student at TED Ankara College. The student had the stress to wake up early not to miss the school bus, which will decrease self-control in sleep-wake cycle and effect the results. o The investigation can not serve us an objective view at the rhythm of the one. This weeks may have included the days which she slept the most throughout his or her life. o As the one is pressurized to have a logical sleep-wake cycle, she was made to sleep, or awake by others, authorities in home. o The little periods which may have been spent for sleep throughout the day (for instance falling asleep on school bus) was neglected. o Hot milk or coffee can change one's sleep-wake cycle, which was neglected to hold constant. o A sound sleep doesn't only have the criteria of timing, but place, tranquility and others, which are not controlled in this investigation. o Tiredness of a person doesn't only depend on one's timing of sleep. Stress, work, alcohol usage and some others can also effect on the sleeping results. o After the bell, for three times throughout the investigation, the one fell asleep again after waking up for the bell and those times were not counted for sleep; which decreases the accuracy. In order to reduce errors, we can redo an investigation on the issue where most of the uncontrolled variables of this one is made to stay constant or are taken into calculation. (coffee, milk, day sleeping, awaking at night etc.) Also, the investigation would be more accurate if the outer pressures were reduced (being made to sleep, school bus stress, not being late to school etc. ...read more.