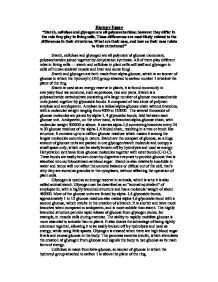 Biology essay --- Starch, cellulose and glycogen are all polysaccharides; however they differ in the role they play in living cells. These differences are most likely related to the differences in their structures. What are their uses, and how so their us

Biology Essay "Starch, cellulose and glycogen are all polysaccharides; however they differ in the role they play in living cells. These differences are most likely related to the differences in their structures. What are their uses, and how so their uses relate to their structures?" Starch, cellulose and glycogen are all polymers of glucose monomers, polysaccharides joined together by dehydration synthesis. All of them play different roles in living cells --- starch and cellulose in plant cells cell wall and glycogen in cells of human skeletal muscle and liver and some fungi . Starch and glycogen are both made from alpha-glucose, which is an isomer of glucose in which the hydroxyl (-OH) group attached to carbon number 1 is below the plane of the ring. Starch is used as an energy reserve in plants, it is found commonly in everyday food we consume, such as potatoes, rice and yams. Starch is a polysaccharide carbohydrate consisting of a large number of glucose monosaccharide units joined together by glycosidic bonds. It composed of two kinds of polymer: amylose and amylopectin. Amylase is a helical alpha-glucose chain without branches, with a molecular weight ranging from 4000 to 150000. ...read more.

Glycogen is created when there are high blood sugar levels and excess glucose in the body. The pancreas secretes insulin, which stimulates the creation of glycogen from glucose and signals the body to use glucose as its main form of energy. Cellulose is made from beta-glucose, an isomer of glucose in which the hydroxyl group attached to carbon 1 is above the plane of the ring. Cellulose is the structural component of the primary cell wall of green plants. It has a much more rigid structure than starch or glycogen, as the glucose monomers are linked by 1, 4 glycosidic bonds of beta-glucose, which produce a very straight chain. the beta-1,4 glycosdic bond is stick outward between each beta-glucose unit , which enable the linkage of hydrogen bond with other beta-blucose units surrounding it , thus the hydrogen bond is actually giving the mechanical strength for cellulose. It is highly insoluble in water, and most organisms can not produce enzymes to break it down. Cellulose is highly permeable , hence materials are able to move in or out of the cellulose cell wall freely. Beta-glucose unit in cellulose is paralel array , which there are some microfibrils formed. ...read more.

It is composed of � glucose molecules, which create a more rigid structure when joined than the ? links found in energy storage glycogen and starch molecules. The reason for this is that when you make 1-4 glycosidic bonds with beta glucose it creats a very straight chain. The chains of cellulose lie close to each other so you get hydrogen bonding between the chains. This makes the molecule very stable and highly resistant to breakdown. You are porobably wearing cellulose as you sit here and read this. Cotton used to make clothes etc is cellulose from around the seeds of the cotton plant. Fibre helps the plant keep a strong structure. Humans can't digest fibre, but it is an important part of a healthy diet, because it helps the digestive tract by giving it more to push on. This helps the contents move through at a reasonable rate. It also helps to stop too much water being absorbed in the large intestine and so reduces constipation. It also feeds the bacteria in your large intestine. These bacteria are not bad, they are good. They can digest some of the cellulose and other molecules your enzymes can not. Half the weight of your poo may be bacteria! But with out healthy bacteria you are less likely to have a healthy gut, so keep eating the fibre! ...read more.