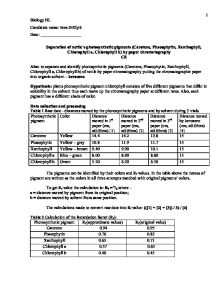 In order to prevent from this, tweezers should be used. Thirdly, while making an extract, there are only a few moments until extract starts boiling thus enzymes could denaturate. To deal with this problem, accurate sample's observations should be done; when bubbles start collecting on the beaker's walls, immediately take it from heater. What's more, kerosene must be put into boiling tubes and the walls can not be touched with it hence when putting a chromatography paper in it, it's difficult not to make it oiled. To prevent from this problem, kerosene should be poured into boiling tube through one side of it and the paper should be put through another. ?? ?? ?? ?? 1 ...read more.