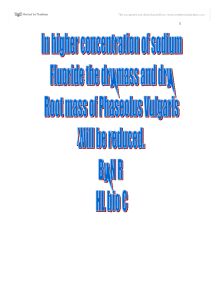 Contents Page Units 1 Title page 2 Contents 3 1.0.1, 1.0.2, 1.0.3 4 1.1.1 5 1.1.2, 1.1.3, 1.1.4 6 1.1.5 7 1.1.6 8 Bibliography 9 2.1.1, 2.1.2 10 2.1.3 11 2.2.1, 2.3.1 12 2.3.2 13 2.3.3 14 2.2.3 cont 15 2.2.3 cont 16 3.0.1 17 3.0.1 cont 18 3.0.2 19 3.0.2 cont 20 3.0.3 1.01-Focus Question - Will higher concentrations of sodium fluoride reduce the dry root mass and the dry mass of Phaseolus vulgaris (green bean)? 1.0.2- Hypothesis - The dry mass and dry root mass of Phaseolus vulgaris will be reduced in higher concentration of sodium fluoride. .1.0.3- Theory - Sodium fluoride is a ionic compound between a single Na atom and a single F atom. This bond through a ionic bond to form Na-F. Sodium fluoride exists naturally is soil in concentrations from 0.5ppm to 1.5ppm. 8kg of sodium fluoride is lethal to a 70kg human (Unknown 2008). Technically sodium fluoride is a salt and therefore it is possible that it could affect plant growth. Ionic salts basically clog out water intake line in plant roots. It inhibits the plants ability to absorb water and nutrients from the soil. Therefore the plant cannot before photosynthesis as effectively. Photosynthesis is vital to the production of plant energy (starch). Without this energy the plant's growth would be slower as it is vital for the production of new cells (R. Perry). Therefore if a plant is placed in an environment with an excess of an ionic compound such as Na-F it is highly possible that he plant will die. There are some exceptions to this however. Many plants such as mangroves thrive is high salt environments as they root systems allow them to absorb salts as nutrients. This however is not the case with the most crops. Crops normally have very thing stalks and have soft root systems. This makes them highly susceptible to many biotic such as weather and biotic factors such as pests. ...read more.

Despite this the graph tends to be exponential, the amount of mass increase between subsequent days increases through the course of the experiment. Simply as the days move on the amount of mass increase increases. Samples 6ppm, 8ppm and 10ppm followed the same trend as control, tap water, 2ppm and 4 ppm until the 9th day, instead of the rate of mass increase booming like the other samples did the rate of mass increase decreased substantially , despite 3 days of growth, this suggest that something occurred on day nine to spawn this occurrence. The drop between days 12 and 14 is not as sharp as the drop samples (control, tap water, 2ppm, 4ppm) however. Looking at the samples there apparent order is highly linier. Control remains on top tap water which remains atop 2ppm which remains on top of 4ppm and so on. This is with the exception of 2ppm and tap water on day 9 where this order is reversed and then corrected on day 12. This suggests some sort of random occurrence as no other samples reflect this occurrence. From this table 2 distinct similar groups can be identified. Group 1 being control, tap water, 2 ppm and 4ppm, group 2 being 6ppm, 8ppm and 10ppm. The groups are relatively close together in their change in mass, Tap water, 2PPM and 4PPM and 6PPM,8PPM,10PPM are close together.. One exception to this however is the control . Its difference in average increase in mass is much larger than that of the previous samples which reflect a negligible difference between samples. Graph 2, 3, 4, 5, 6, 7, 8 - These graphs are all inter related and serve as a comparison between standard deviations, they are separate because as a single entity they are simply too cluttered. Although the actual deviations for each individual sample were all different a very distinct trend could be seen. ...read more.

Error identified Type of error Factor for control Removal of caps on Petri dishes Systematic Use larger containers to accommodate plant growth Removal of plants from environment Systematic By considering the total mass of the environment this value could be subtracted by the given mass of the sample to find mass minus the environment. Rather looking at the change in mass disregarding environment, by doing this the seed does not have to be removed. Fungal spores next to high fluoride samples Systematic Set up experiment away from other people's tests, especially those involving plants or chemicals. Difference in seeds Systematic Seeds were of different original weight, potential energy, ect. It is near impossible to find two identical seeds but perhaps it is a consideration to use seeds of more similar physical attributes or to test the given data against different seeds. Tap water contaminates Systematic Tap water cannot be validly compared to other samples; this could be remedied by preparing a sodium fluoride concentration to the exact specification of government water control without including other possible contaminates such as chlorine. Differences in perlite volume Systematic This could be controlled by measuring out a certain quantity of perlite and using the same mass for each sample. Drowning of plants Systematic By reducing amount of water on every plant the higher concentrations of sodium fluoride will not drown, this however makes data redundant as reduced water intake capacity could be a effect of increased sodium fluoride. Lack in mass validity Systematic The effect of sodium fluoride on Phaseolus Vulgaris should be compared to its effect on other plants. Also other factors effecting growth should be considered Composition of sodium fluoride Systematic The singular elements of sodium and fluoride should be tested independently to find if only one of the elements if effecting plant development. Death of seeds Random As suggested some seeds are simple fated to die, there growth is stunted. Death cannot be negated but perhaps replication could increased and therefore dying samples could be included as there affect on the overall results would be negligible. ?? ?? ?? ?? 1 ...read more.