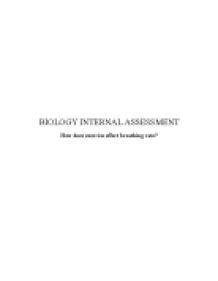 This lactic acid can poison muscle and cause cramp, so that it must be removed from body as quick as possible. Therefore, we have to increase breathing rate in order to break down this amount lactic acid into energy. Evaluation There?s no anomaly during experiment carried out. However, there are still some limitations. + The rest period is quite short so that the person who does the exercise will not fully recover, which affects the following record of breathing rate. + Only one person does the exercise so that it?s difficult to assess how the result depends on physical condition of each individual. + The temperature at that time when we carried out the experiment is quite high, which might affect the result. Improvement + Increase the time for resting to 10 minutes. + Two people do the same exercise to compare the result. + Choose the best time of the day when body is in the best condition and is not affected by some factors such as: temperature, health? ...read more.