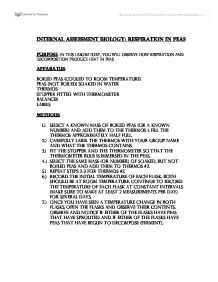 Internal Assessment Biology: Respiration in Peas Purpose: In this laboratory, you will observe how respiration and decomposition produce heat in peas. Apparatus: Boiled peas (cooled to room temperature) Peas (not boiled) soaked in water Thermos Stopper fitted with thermometer Balances Labels Methods: 1.) Select a known mass of boiled peas (or a known number) and add them to the thermos 1. Fill the thermos approximately half full. 2.) Carefully label the thermos with your group name and what the thermos contains. 3.) Fit the stopper and the thermometer so that the thermometer bulb is immersed in the peas. 4.) Select the same mass (or number) of soaked, but not boiled peas and add them to thermos #2. 5.) Repeat steps 2-3 for thermos #2. 6.) Record the initial temperature of each flask. Both should be at room temperature. Continue to record the temperature of each flask at constant intervals (make sure to make at least 2 measurements per day) for several days. 7.) Once you have seen a temperature change in both flasks, open the flasks and observe their contents. ...read more.

The most important of them being: Water, oxygen, temperature and light. When the soaked peas finally go through the process of germination, they speed up their rate of respiration. Energy (ATP) is released during respiration. This energy is used by the pea to sprout later on. Out of all this we conclude that the process of germination by which the peas speed up their respiration releases energy, and as we already know there is a lot of heat released simultaneously when the energy is released. This provides a good explanation to why the temperature rises inside the flasks of the non-boiled peas.1 In the other flask we had the boiled peas. Now these peas saw a short increase in their temperature, but afterwards the temperature started to decline. First we must consider the fact that these peas were boiled, which means they were killed (they are not alive anymore). The boiled peas go through the process of decomposition. The process of decomposition is the process by which tissues of dead organisms break down into simpler forms of matter. ...read more.

The temperature changed each time the window was open, letting in fresh air, making it a little bit colder, or a lot of lab devices like Bunsen burners were used and etc... that made the room hotter. Solution: Again try to find a room inside the school where the peas would stay in the same spot, in the same temperature uninterrupted. 4.) The amount of oxygen present in the room was another factor which wasn't considered well. The fact that each time the window is opened there is a sufficiently large amount of oxygen entering the room speeding up the respiration of the peas, and when the school is closed during the evening most of the windows are closed resulting in less oxygen being present in the room. Solution: You may want to again find a special room to do this, and open a window or provide some sort of way for fresh oxygen to enter the room in relatively the same amounts and keep it that way, until your experiment is over. 1 In Cellular Respiration. [Online]. [Cited on 10th May]. Available from world wide web:<URL: http://en.wikipedia.org/wiki/Cellular_respiration> 2 In Decomposition. [Online]. [Cited on 10th May]. Available from world wide web:<URL: http://en.wikipedia.org/wiki/Decomposition> ...read more.