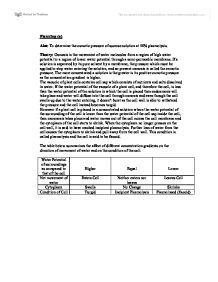 4. A long strip of epidermis from the purplish lower surface of the Rhoea discolor leaf was peeled and this strip was cut into 5 small pieces. 5. 2 pieces of epidermis were immersed in each solution in the different Petri dishes which were then covered and left for 30 minutes. 6. The epidermis pieces from the Petri dishes were them mounted onto different slides with one drop of the same solution the piece was contained in, and then covered with a cover slip. These slides were examined under a high power microscope. 7. The number of total cells (unplasmolysed + plasmolysed) and the number of plasmolysed cells was counted in three different fields for each strip. 8. The percentage of plasmolysed cells in each piece of epidermis was then calculated. 9. All the observations and calculations were recorded and then a graph of percentage of plasmolysed cells against sucrose concentration was plotted. 10. The exact concentration of sucrose for which 50% plasmolysis of the plant cells was caused was determined by reading off the graph. 11. The osmotic pressure of that concentration of sucrose was calculated by using the formula: Osmotic pressure = 22.4 x (t + 273) ...read more.

> Be careful when handling the solutions, as they can easily be contaminated which will alter the concentration and disturb the experiment. > Also when preparing the slide with the leaf pieces to be viewed under the microscope, be careful with all the instruments specially the forceps. Forceps have a sharp point; hence scratch on the body from them should be avoided. Modifications > First, the experiment can be repeated several times to increase the accuracy of the results obtained. Not only this but during the experiment, several observers can be used to count the number of cells and then the mean value can be found. This will help to avoid any error from incorrect human observations. > Also, the leaf tissue used in the experiment could be collected from several areas on the leaf. Conclusion Through this experiment we have managed to find out the osmotic pressure of that leaf and since our hypothesis was proved right the osmotic pressure must also be close to the literature value. So the conclusion is that the vacuole must exert a pressure of 4.78 atmospheres after 50% of plasmolysis to prevent more water from exiting the cell. ?? ?? ?? ?? ...read more.