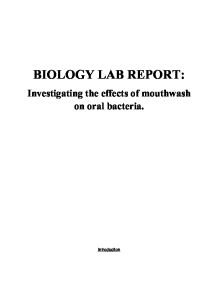 BIOLOGY LAB REPORT: Investigating the effects of mouthwash on oral bacteria. Introduction Mouthwash targets bacteria in the mouth and are either antiseptic or antibacterial in nature. Antiseptics are antimicrobial substances that are applied to living tissue or skin to reduce the possibility of infection. Antiseptics are generally distinguished from antibiotics by the latter's ability to be transported through the lymphatic system to destroy bacteria within the body, and from disinfectants, which destroy microorganisms found on non-living objects. Some antiseptics are true germicides, capable of destroying microbes (bacteriocidal), whilst others are bacteriostatic and only prevent or inhibit their growth. Antibacterials are antiseptics that have the proven ability to act against bacteria. An accumulation of oral bacteria can lead to a build-up of dental plaque (the material that adheres to the teeth and consists of bacterial cells, which if are not removed through flossing and brushing, can lead to gingivitis or periodontal disease). According to the American Dental Association, regular brushing and proper flossing are enough in most, and mouthwash should only be used as a short-term solution. ...read more.

2. Without removing the lid, carefully turn the plate upside down and using a marker, divide the plate . into 4 quadrants. 3. label the quadrants. 4. Using the sterile swab, swab the inside of your cheek. 5. Open the petri dish and gently (so as not to destroy the agar) wipe the swab across the entire plate. 6. When finished swabbing the plate, quickly replace the lid. 7. Obtain three samples of mouthwash in small beakers. 8. Place a filter paper disc in each solution to soak for about lA s. 9. Carefully remove the lid from your agar plate and using forceps, place a soaked filter paper disc in each quadrant. 10. Make a note of which mouthwash disc was placed in which quadrant. 11. Seal the edges of your agar plate with tape. (From now on, the tape and lid are not to be removed!!) 12. Place your agar plate in the incubator for 48 hours. Day 2 1. Obtain your group's agar plate from the incubator - DO NOT REMOVE TAPE 2. ...read more.