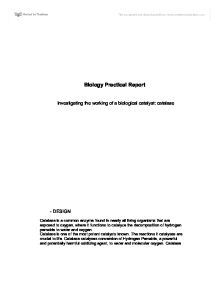 Biology Practical Report Investigating the working of a biological catalyst: catalase - DESIGN Catalase is a common enzyme found in nearly all living organisms that are exposed to oxygen, where it functions to catalyze the decomposition of hydrogen peroxide to water and oxygen. Catalase is one of the most potent catalysts known. The reactions it catalyses are crucial to life. Catalase catalyses conversion of Hydrogen Peroxide, a powerful and potentially harmful oxidizing agent, to water and molecular oxygen. Catalase also uses Hydrogen Peroxide to oxidise toxins including Phenols, Formic Acid, Formaldehyde and Alcohols. ...read more.

dioxide Tube 3: cube of liver Tube 4: 1/2 ml of ground liver Tube 5: cube of boiled liver Tube 6: cube from acidic condition( pre-prepared in a solution) Tube 7: cube of liver from alkaline condition(pre-prepared in a solution) Tube 8: 1/2 ml of ground liver,also temperature of H2O2 was measured before and after the addition of liver. Sidenote: it could be dangerous to test the tube 4 condition for oxygen ( with a bung on) ,since the substance could be in explosive condition. After the testing of reactions was finished. Droplets of substances were used to test for Ph levels. ...read more.

was added to the Hydrogen Peroxide (clear), it bubbled. It creates Water and Oxygen gas and the reaction is decomposition. Hydrogen Peroxide --> Water + Oxygen Regarding test tube 3; Liver contains high amounts of catalase which speeds up the reaction. Regarding test tube 5; Catalase is the protein that catalyzes the decomposition of Hydrogen Peroxide to diatomic Hydrogen and Oxygen. Heat denatures or destroys proteins, so a boiled liver sample has denatured catalase proteins which can no longer perform their metabolic function. Refrences : 1.Chelikani P, Fita I, Loewen PC (January 2004). "Diversity of structures and properties among catalases". Cell. Mol. Life Sci. 2.http://www.catalase.com/cataext.htm ...read more.