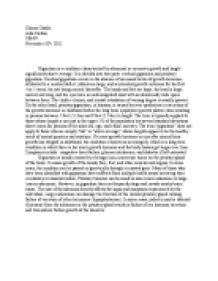 ﻿Cherno Okafor Aida Stefani SBI4U November 10th, 2012 Gigantism is a condition characterized by abnormal or excessive growth and height significantly above average. It is divided into two parts: cerebral gigantism and pituitary gigantism. Cerebral gigantism occurs in the absence of increased levels of growth hormone, attributed to a cerebral defect; infants are large, and accelerated growth continues for the first 4 or 5 years, the rate being normal thereafter. The hands and feet are large, the head is large, narrow and long, and the eyes have an antimongoloid slant with an abnormally wide space between them. The child is clumsy, and mental retardation of varying degree is usually present. On the other hand, pituitary gigantism, in humans, is caused by over-production or secretion of the growth hormone in childhood before the long bone epiphyses (growth plates) close resulting in persons between 7 feet (2.13m) and 9 feet (2.74m) in height. The term is typically applied to those whose height is not just in the upper 1% of the population but several standard deviations above mean for persons of the same sex, age, and ethnic ancestry. ...read more.

It may also lead to low levels of cortisol, estradiol (girls), testosterone (boys), and thyroid hormone. Some of the symptoms associated with gigantism involve: delayed puberty, double vision or difficulty with side (peripheral vision), frontal bossing and a prominent jaw and forehead, headaches and visual disturbances and nausea caused by the tumor pressing on the brain and nerves to the eyes, increased sweating, irregular periods (menstruation), large hands and feet with thick fingers and toes, release of breast milk, thickening of other facial features, and weakness along with hypertension, hoarseness, and joint pain. The treatment for gigantism varies. In pituitary tumors with well-defined borders, surgery is the treatment of choice and can cure many cases. For situations in which surgery cannot completely remove the tumor, medication is the treatment of choice. The most effective medications are somatostatin analogs (such as octreotide or long-acting lanreotide), which reduce the growth hormone release. Dopamine agonists (bromocriptine mesylate, cabergoline) have also been used to reduce growth hormone release, but these are generally less effective. ...read more.

Screening for complications of gigantism is required. Height and overall size can affect mobility due to muscle weakness, osteoarthritis and peripheral nerve damage. Everyday activities can be affected such as buying homes, furniture, cars, clothes and shoes as they are made for ?average-sized people?. Some psychological problems may also be caused by this very rare condition. Reduction of growth hormone levels improve life expectancy to normal levels, significantly improving symptoms and prevent most of the associated complications. Left untreated, gigantism is associated with significant complications and an increased death rate of around twice the normal average for the population. In summary, the differential diagnosis of gigantism includes a significant number of heterogeneous disorders exhibiting a staggering array of clinical and genetic features. In most cases, the history, physical examination and adjunctive biochemical and/or molecular genetic testing will ultimately reveal the likely diagnosis. Albeit rare, diseases resulting in gigantism afford the unique opportunity for a glimpse into the complex mechanisms of growth regulation. Thus, continued clinical and scientific investigation will enhance not only individual patient care, but also collective insight into the intricacies of the fundamental processes of human growth. ...read more.