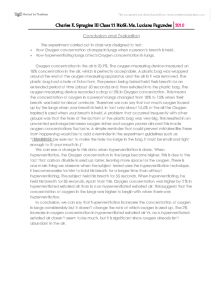 A problem that occurred frequently with other groups was that the hole at the bottom of the plastic bag was very big. This resulted in an unwanted exchange between oxygen richer and oxygen poorer airs and this made oxygen concentrations fluctuate. A simple reminder that could prevent mistakes like these from happening would be to add a reminder in the experiment guidelines such as "(REMINDER: be sure not to make the hole too large in the bag. It must be small and tight enough to fit your mouth in.)" We can see a change in this data when hyperventilation is done. ...read more.