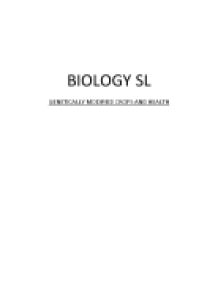 ﻿BIOLOGY SL GENETICALLY MODIFIED CROPS AND HEALTH Tessa Reed 4mm In today's society, the goal of many scientists is to try to figure out as much as possible about genetically modified organisms and their influence on humans, animals and plants. Very often, scientists genetically modify the food humans eat, in order for it to live in a certain area where it usually couldn't, to protect it from diseases or simply for it to taste or look better. A good example for this is the usage of artificial genes on rice plants, which protect it from viruses, increase their grain size or generate flavors and nutrients. As we all know, rice is the most important food for most of the human population. The aim of the upcoming experiment is to test how artificial substances affect the growth and development of rice plants and, later, the effect of their fruit on the many humans that eat them. ...read more.

The other half (50) will be eating the rice that was not artificially grown. After the given time period, my team and I will measure our results to see the influence of the genetically modified rice on the humans that ate it, in contrast to the results of the humans that ate ?regular? rice. Their body weight, blood sugar level and blood pressure will be measured and the results will then be compared. Variables: Dependent variables: The dependent variables are the measured body weight, blood sugar level and blood pressure of the humans that participated in the experiment. These results depend upon the rice grains that they eat and their influence on the human bodies. Independent variable: The independent variable is the food (rice) that will be given to the humans. 50% (meaning 50 people) will be eating the rice that was genetically modified and the other 50% will be fed with rice grown without the addition of LL62. ...read more.

100 people (divided into two groups of fifty), who will be eating the rice every 7. instruments with which people’s blood pressure (sphygmomanometer), sugar (blood sugar glucose meter) and body weight (simple scales) will be measured with 8. a calendar or two ï Procedure through steps: 1. going to India and planting 500 rice seedlings near the delta of the river Cauvery 2. spraying genetically modified rice cultivator (LL62) on the crops, 3-4 times in the time period of 3 months 3. after 3 months harvesting the rice 4. dividing 100 people into 2 groups of 50, who will be eating the rice daily (50% will be eating the GM rice and 50% will be eating the non-GM rice) 5. repetition of step 2., 3. and 4. for the next year and three months 6. measuring the blood pressure, blood sugar and body weight of each human in the two groups of people 7. comparing the results of the humans who ate the GM rice to the results of the humans who ate the rice with no genetic modification ...read more.