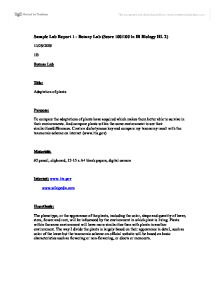 Sample Lab Report 1 - Botany Lab (Score 100/100 in IB Biology HL 2) 11/29/2009 1B Botany Lab Title: Adaptation of plants Purpose: To compare the adaptations of plants have acquired which makes them better able to survive in their environments. And compare plants within the same environment to see their similarities/differences. Create a dichotymous key and compare my taxonomy result with the taxonomic scheme on internet (www.itis.gov) Materials: #2 pencil, clipboard, 12-15 x A4 blank papers, digital camera Internet: www.itis.gov www.wikipedia.com Hypothesis: The phenotype, or the appearance of the plants, including the color, shape and quantity of leave, stem, flower and root, will be influenced by the environment in which plant is living. Plants within the same environment will have more similarities than with plants in another environment. The way I divide the plants is largely based on their appearance in detail, such as color of the leave but the taxonomic scheme on official website will be based on basic characteristics such as flowering or non-flowering, or dicots or monocots. Variables: Independent variable: Environment of the plant Dependent variable: Phenotype of the plant Controlled variable: Temperature (same location) Procedure: see handout attached Data: see handouts attached Result: Comparison of adaptations: chart attached Comparison of plants in two different locations: - Plants in Desert Garden (Desert Ecosystem): Plants in the desert ecosystem get long period of sunlight everyday and the temperature is high. ...read more.

Fibrous root of plants can stabilize the plant in wet, loose soil. Veins around the plant grow upward trying to get sunlight. Plants within Desert Garden: - Golden Barrel Cactus and Wolly Cactus have needles instead of leaves. The photosynthesis reaction thus can only happen on the stem. Stem of the cactus is usually green and thick which indicates the location of water storage. Aloe Cameroni and Aloe Bainesii have thick, hard leaves with small needles on them. The water storage and photosynthesis happen on their leaves. Their stems have brownish color. Top of the stem is smooth and the end of the stem is rough. Smooth part of the stem is covered by a wax layer which protects the surface of the plant from losing water. Ponytail Palm has a cone shaped stem attached to the ground. The water storage is at the end of the stem. These plants don't have too many leaves and none of them is tall. Plants within Palm Canyon: - Banana tree is the shortest plant. It has fruit but doesn't have too many leaves. Banana tree grows itself without being surrounded by too many plants which makes it unique. This is due to the large amount of water banana needs for its fruit. ...read more.

Plantae Subkingdom Tracheobionta -- vascular plants Division Magnoliophyta --flowering plantsplantes Class Liliopsida -- monocotyledons Subclass Arecidae Order Arales Family Araceae Genus Philodendron Schott - philodendron Conclusion: The data supports my hypothesis. The phenotype is largely influenced by the environment in which plants are living. Plants in the same environment have more similarities to each other because they need to adapt to the harsh environment. My dichotymous classification key divided the plants based on their difference in appearance but they are not significant. The www.itis.gov website divided the plants based on the basic characteristics which can truly distinguish plants. Evaluation and improving the future investigation: The data processing was hard because of the plants I chose in the desert garden were not diverse. Among 5 plants I had two cacti and two aloes. It made the evaluation of adaptation of plant to the harsh environment difficult due to lack of data. For future investigation, I recommend choosing plants which don't belong to the same order. The dichotymous classification key is too shallow. It didn't divide plants based on the phenotype characterized by each group. If there are more plants with same leave color, but with different vein patter, this type of classification (my dichotymous classification key) would provide wrong information. The dichotymous classification key should be made based on characteristics based on the structure of the plant. ...read more.