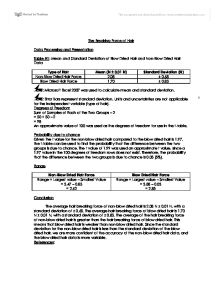 Probability due to chance Given the t value for the non-blow dried hair compared to the blow dried hair is 1.97, the t-table can be used to find the probability that the difference between the two groups is due to chance. The t value of 1.99 was used an approximate t value, since a 1.97 value in the 100 degrees of freedom rows does not exist. ...read more.