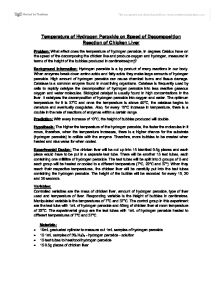 My hypothesis was correct, but my prediction was wrong. This is because I used inappropriate information when coming up with my prediction. I used background information on the enzyme catalase when what I was really changing was the substrate (hydrogen peroxide). Limitations/Improvements: To create a better lab design, more intervals of the temperature of the hydrogen peroxide or other substrates in reactions could be used, to form a generalization about temperature change and reactivity relate to the substrates. Also only five trials were used for each temperature of hydrogen peroxide; more trials should have been used for finding a more accurate measure for the height of the bubbles. Moreover, even though the pieces of liver were the same mass, their surface area might differ. The ones with a larger surface area would have better results because a larger surface area means more enzymes are exposed to the solution, therefore more reactions can occur at the same time. This also decreases the accuracy of the results. Some modifications could be to mash up the liver so that the surface area for each 0.5g sample would be the same. ?? ?? ?? ?? ...read more.