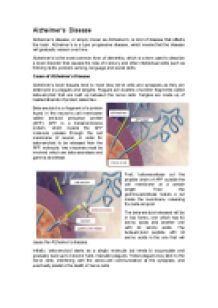 Transfer-Encoding: chunked ﻿Alzheimer?s Disease Alzheimer?s disease, or simply known as Alzheimer?s, is kind of disease that affects the brain. Alzheimer?s is a type progressive disease, which means that the disease will gradually worsen over time. Alzheimer?s is the most common form of dementia, which is a term used to describe a brain disorder that causes the loss of memory and other intellectual skills such as thinking skills, problem-solving, language and social skills. Cause of Alzheimer?s Disease Alzheimer?s brain tissues tend to have less nerve cells and synapses as they are destroyed by plagues and tangles. Plagues are clusters of protein fragments called beta-amyloid that are built up between the nerve cells. ...read more.

Initially, beta-amyloid starts as a single molecule but tends to accumulate and gradually build up to become hard, insoluble plagues. These plagues may stick to the nerve cells, interfering with the cell-to-cell communication at the synapses, and eventually leads to the death of nerve cells. Tau protein molecules that are found in the nerve cells function to stabilize the microtubules. Tau performs this function with the aid of a protein called tubulin along with its own isoforms and phosphorylation. However, when tau protein undergoes excess phosphorylation, which means excess phosphate groups bind to the specific sites of the tau protein?s molecular chain, causing the tau protein to be seperated from the microtubules and clumps together with other separated tau, forming neurofibrillary tangles. ...read more.

As the disease progress to a later stage, individuals will start facing problem with their intellectual skills. The part of the brain that store this skill is affected by the disease, therefore They may have an impaired language and speaking skills. For example, they will be struggling to follow a conversation or thinking of common words to say during a conversation. They will be also facing difficulty in concentrating or thinking and reason even in the simplest matter. They are also likely to have a problem with making decisions and planning an activity. All of this will affect their daily lives as they are having problem with every single task which will be hard for them to perform their daily routine. They might even need someone else?s support to help them conduct their daily basis. ...read more.