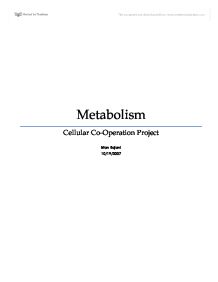 Cell Biology. Perhaps the most crucial process the cell must undertake to sustain life is metabolism; that is, the ability to produce energy to break down food (catabolism) and to construct the inner components of cells (anabolism).

Metabolism Cellular Co-Operation Project Irfan Rajani 10/19/2007 The cells that make up our body serve a variety functions; the most important one being the ability to ultimately give life to the many different organisms living in our world. However, intracellularly there are various processes taking place that allow for life to be possible. That is, cells actively undergo processes such as intracellular digestion, metabolism, cellular respiration, photosynthesis, and transport. Perhaps the most crucial process the cell must undertake to sustain life is metabolism; that is, the ability to produce energy to break down food (catabolism) and to construct the inner components of cells (anabolism). So what makes a cell tick? The key to this answer lies in the fact that each individual cell is made up of co-dependent organelles that perform specific functions. In the case with metabolism, it is the mitochondria and the chloroplasts that play the largest part in the process, but other organelles such ...read more.

With catabolism, digestion takes place carefully step by step; for example with carbohydrate digestion, polysaccharides like starch or glycogen would be broken up into multiple monosaccharides like glucose or fructose, and lastly undergo glycolysis to produce energy and a smaller molecule (i.e. pyruvate acid). This same concept holds true for essentially any other macromolecule, including substances such as lipids and proteins. Above are two diagrams explaining the process of cellular respiration within the mitochondria displaying its individual components The best example of catabolism is cellular respiration, as it describes the reaction that occur within cells to obtain energy and remove cellular waste. What happens is that a simple macromolecule such as glucose enters the cell membrane through endocytosis, enveloped by a vesicle, and then transported to the mitochondrion where the oxidizing agent oxygen reacts with it to produce carbon dioxide, water, and ATP (C6H12O6 + 6O2 --> 6CO2 + 6H2O +38ATP). ...read more.

Above are two diagrams explaining the process of photosynthesis within the chloroplast and displaying its individual components Photosynthesis, which is fundamentally cellular respiration in reverse, is perhaps the most common example of anabolism. As the diagram above indicates, oxygen and carbon dioxide enter the chloroplast of a plant cell and spontaneously react as the sunlight penetrates its membrane to produce a simple sugar (usually glucose), water, and oxygen. The sugar is either used up right away (cellular respiration) or stored within a cell vacuole for later use. Just as the mitochondrion is the powerhouse of the cell, the chloroplast is its food production center. As such, it is expected that both cellular respiration and photosynthesis are crucial in the survival and function of a cell. Photosynthesis especially is important as it only occurs in plant cells; ultimately, all of the foods we consume as humans come from other plants. ...read more.