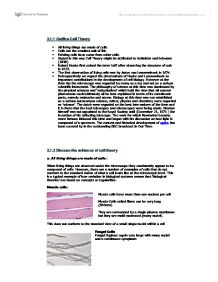 2.1.1 Outline Cell Theory * All living things are made of cells. * Cells are the smallest unit of life. * Existing cells have come from other cells. * Stated in this way Cell Theory might be attributed to Schleiden and Schwann (1838). * Robert Hooke first coined the term 'cell' after observing the structure of cork in 1655. * The first observation of living cells was by Anton van Leeuwenhoek in 1674. * Retrospectively we regard the observations of Hooke and Leeuwenhoek as important contributions in the development of cell biology. However at the time the the microscope was regarded by many as a toy and not as a serious scientific instrument. The philosophy of science at this time was dominated by the physical sciences and 'reductionism' which held the view that all natural phenomena could ultimately all be best explained in terms of its constituent parts, namely molecules and atoms. Biology at this time was not established as a serious autonomous science, rather, physics and chemistry were regarded as 'science'. The dutch were regarded as the best lens makers of the time and it is there that the best telescopes and microscopes were being made. Newton himself was not appointed to the Royal Society until (December 21, 1671 ) the invention of his reflecting telescope. The work for which Newtonian became more famous followed this time and began with his discussion on how light is composed of a spectrum. The context and historical development of optics has been covered by in the outstanding BBC broadcast In Our Time. 2.1.2 Discuss the evidence of cell theory a. All living things are made of cells: When living things are observed under the microscope they consistently appear to be composed of cells. However, there are a number of examples of cells that do not conform to the standard notion of what a cell looks like at the microscopic level. ...read more.

Loxodonta africana (African elephant). This is the largest land living mammals. The adult African elephants can reach a length of 18-24 feet and a height of 10-13 feet. They weigh in at 8,800-15,500 pounds .Maximum size is reached at around 25 years of age. According to the calculations above the elephant should have a small surface are to volume ratio in comparison to smaller animals. Heat exchange ought to be quite slow which would be a problem for an animal living in a warm region. The elephant has evolved large ears to increase the surface area for heat exchange allowing the elephant to remain cool. * Small organisms have the opposite problem of a rapid rate of exchange with the environment. Sorex minutus (pygmy shrew) Size: Approximately 60mms from tip of nose to base of tail. The tail is around 40mms long. Mass: 4 grams. This shrew looses body heat so fast that it consumes food at a furious rate simply to produce heat from respiration. I understand that this particular species needs to eat every two hours to stay alive. This is a brief introduction to scaling in biological systems. There are a variety of other fascinating examples. 2.1.7 Multicellular organisms show emergent properties syllabus: 'Emergent properties arise from the interaction of the component parts; the whole is greater than the sum of the parts'. 'I define life as....a whole that this pre-supposed by all its parts' S. Coleridge Systems biologists attempt to put together the parts that make up a system and then observe the properties of that 'emerge' from the system but which could not have predicted from the parts themselves. As a model consider the electric light bulb. The bulb is the system and is composed of a filament made of tungsten, a metal cup, and a glass container. We can study the parts individually how they function and the properties they posses. ...read more.

The process of therapeutic cloning is shown in this diagram. It begins by taking a somatic (body) cell from the individual. The somatic cell is fused with an egg that has had its nucleus removed. The resulting cell is genetically identical to the individual because it contains the DNA from the individual's somatic cell. The new cell behaves like a fertilized egg and develops into a blastocyst. ES cells can be harvested from the blastocyst and grown in culture. These ES cells could be used to treat the individual without encountering resistance from his or her immune system. Notice that we do not not refer to this type of blastocyst as an embryo. This is because, technically speaking, an embryo is the result of the union of an egg and a sperm, which has not happened in this case. � 1. The patient requires the replacement of some diseased tissue. First we obtain a health cell from the same patient. 2. At the same time we require a human egg cell. This is mainly as the cell retains the tendency to divide unlike the sample tissue from the patient. 3. The nucleus is removed from the egg and discarded. The cell body itself is retained. 4. The nucleus of the patients cell is removed and retained. The cell body of the patients cell is discarded. 5. The nucleus from the patients cell is transferred to the enucleated cell body. 6. The cells then stimulated to divide forming a clone. 7. The cell mass forms a blastocyst. 8. The inner cell mass becomes a source of totipotent stem cells. Totipotent means they are capable of being stimulated to become one of any type of cell. 9. Cells are stimulated using differentiation factors to become the type of cell required for therapy. 10. Therapy would require the transfer of the new healthy cell to the patient. In therapeutic cloning these cells have the same immune system identity as the patient therefore there is not immune rejection problem. It is important that this technique is not confused with embryonic stem cell cultures or with reproductive cloning. ...read more.