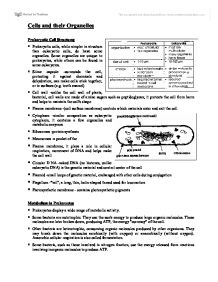 Cells and their Organelles Prokaryotic Cell Structures * Prokaryotic cells, while simpler in structure than eukaryotic cells, do have some organelles. Some organelles are unique to prokaryotes, while others can be found in some eukaryotes. * Slime capsule -surrounds the cell, protecting it against chemicals and dehydration; can make cells stick together, or to surfaces (e.g. tooth enamel) * Cell wall -unlike the cell wall of plants, bacterial, cell walls are made of amino sugars such as peptidoglycan; it protects the cell from harm and helps to maintain the cell's shape * Plasma membrane -(cell surface membrane) controls which materials enter and exit the cell * Cytoplasm -similar composition as eukaryotic cytoplasm, it contains a few organelles and metabolic enzymes * Ribosomes -protein synthesis * Mesosomes -a pocket of the * Plasma membrane, it plays a role in cellular respiration, movement of DNA and helps make the cell wall * Circular D NA -naked DNA (no histones, unlike eukaryotic DNA) is the genetic material and control center of the cell * Plasmid -small loops of genetic material, exchanged with other cells during conjugation * Flagellum -"tail"; a long, thin, helix-shaped thread used for locomotion * Photosynthetic membrane - contains photosynthetic pigments Metabolism in Prokaryotes * Prokaryotes display a wide range of metabolic activity. * Some bacteria are autotrophic. They use the sun's energy to produce large organic molecules. These molecules are later broken down, producing ATP, the energy "currency" of the cell. * Other bacteria are heterotrophic, consuming organic molecules produced by other organisms. They may break down the molecules aerobically (with oxygen) or anaerobically (without oxygen). Anaerobic cellular respiration is also called fermentation. * Some bacteria, such as those involved in nitrogen fixation, use the energy released from reactions involving inorganic molecules to produce ATP. Animal Cell Plant Cell Cell Membranes * One universal feature of all cells is an outer limiting membrane called the plasma membrane. ...read more.

* In addition, all eukaryotic cells contain elaborate systems of internal membranes, which set up various membrane-enclosed compartments within the cell. * Cell membranes are built from lipids and proteins. Structure of the Plasma Membrane * Consists of a phospholipid bilayer with embedded proteins * This leads to the description of the Fluid Mosaic Model * Fluid as it is flexible and can move * Mosaic of imbedded proteins Embedded Proteins Three main types of membrane proteins: * Transport proteins- movement in an out of the cell (ex. channel and carrier proteins) * Receptor Proteins- trigger cellular responses when specific molecules from outside the cell bind to them (ex. hormones) * Recognition Proteins- for recognition by your body so it doesn't try to destroy them Function of the Plasma Membrane There are three main functions of the plasma membrane: * To isolate the cell's content from the external environment (phospholipid bilayer) * Regulates exchange of material from inside and outside of the cell (phospholipid bilayer and embedded proteins) * Communicates with other cells (proteins) Transport Across Membranes * Molecules in fluids move in response to concentration gradients * Fluid = liquid or gas * Concentration = # of molecules/unit volume * Gradient = physical differences between different areas: Ex. Concentration, pressure, or electrical charge * Fluid molecules are in constant motion Passive Transport * Cell does not expend energy; movement of substances is simply down gradient * Simple diffusion -movement through cell membranes * Facilitated diffusion -movement of water-soluble molecules through a channel or carrier protein Osmosis * Diffusion of water across a semi-permeable membrane, more permeable to water that the substances dissolved in it * Isotonic -equal concentrations on each side * Hypertonic -"higher concentration" Ex. Salt solution. (cells lose water = plasmolysis) * Hypotonic -"lesser concentration" Distilled water (cells gain water = swells and may burst) Movement of Water Across the Cell Membrane Plasmolysis- Shrinking from Loss of Water Endocytosis * Movement of large particles, including small organisms, into a cell by engulfing the extracellular material, as the plasma membrane forms membrane bound sacs that enter the cytoplasm (3 types ) ...read more.

pinocytosis, receptor mediated pinocytosis & phagocytosis Exocytosis * Movement of materials out of a cell by enclosing material in a membranous sac that moves to the cell surface, fuses with plasma membrane, opens to outside, allowing contents to diffuse away Ex. Contractile vacuoles in amoeba, packets of waste materials Phagocytosis- Cell Eating Pinocytosis- Cell Drinking Facilitated Diffusion * Movement across the cellular membrane of large organic molecules can de done through specialized proteins that allow specific molecules to enter * These are still moving with the gradient and therefore are still a passive process Carrier Proteins * Carrier proteins allow molecules of a certain size and shape to pass through the plasma membrane * These proteins are integral proteins and allow movement both in to and out of the cell * These molecules that pass through must be non-charged * An example is the movement of glucose in and out of the cell Channel Proteins * Channel proteins allow ions of a certain charge (- or +) to pass through the plasma membrane * These are also integral proteins and allow movement both in to and out of the cell * The ions that pass through must have the opposite charge of that of the protein Active Transport * Movement of substances across membrane, usually against a concentration gradient, using cellular energy * Active transport -movement of individual small molecules or ions through membrane spanning proteins, using cellular energy (normally ATP) Sodium Potassium Pump * The cytoplasm of animal cells contains a concentration of potassium ions as much as twenty times greater than that in the extracellular fluid. * The extracellular fluid contains a concentration of sodium ions as much as ten times greater than that within the cell. * These concentration gradients are established by active transport. * The transporter does both jobs, using the energy from the hydrolysis of ATP to transport 3 Na+ ions out of the cell for each 2 K+ ions pumped into the cell. ...read more.