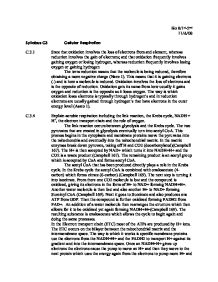 Cellular Respiration. Explain aerobic respiration including the link reaction, the Krebs cycle, NADH + H+, the electron transport chain and the role of oxygen.

Bio II/1st-2nd 11/6/08 Syllabus C3 Cellular Respiration C.3.1 State that oxidation involves the loss of electrons from and element, whereas reduction involves the gain of electrons; and that oxidation frequently involves gaining oxygen or losing hydrogen, whereas reduction frequently involves losing oxygen or gaining hydrogen The term reduction means that the molecule is being reduced, therefore obtaining a more negative charge (Nave 1). This means that it is gaining electrons (-) and is how a molecule is reduced. Oxidation involves the loss of electrons and is the opposite of reduction. Oxidation gets its name from how usually it gains oxygen and reduction is the opposite as it loses oxygen. The way is which oxidation loses electrons is typically through hydrogen's and in reduction electrons are usually gained through hydrogen's that have electrons in the outer energy level (Asato 1). C.3.4 Explain aerobic respiration including the link reaction, the Krebs cycle, NADH + H+, the electron transport chain and the role of oxygen. ...read more.

Another water molecule is then lost and also another H+ to NAD+ forming Succinyl CoA (Campbell 169). Next it goes to Succinate and also produces one ATP from GDP. Then the compound is further oxidized forming FADH2 from FAD+. An addition of a water molecule then rearranges the structure which then allows for it to be oxidized yet again forming NADH+H+(Campbell 169). The resulting substance is oxaloacetate which allows the cycle to begin again and doing the same processes. In the Electron transport chain (ETC) most of the ATPs are produced by H+ ions. The ETC occurs on the bilayer between the mitochondrial matrix and the intermembrane space. The way is which it works is specific membrane proteins use the electrons from the NADH+H+ and the FADH2 to transport H+ against its gradient and into the intermembrane space. Once an NADH+H+ gives up electrons the electrons cause the pump to move an H+ and then they move to the next protein which uses ...read more.

Eventually, once a high enough concentration has been built, the H+ flow down the concentration gradient through a protein complex called ATP synthase. This complex uses the gradient and the energy from the H+ ions to attach a phosphate to ADP, thus forming ATP (Hrycyna 1). This process of using the concentration gradient to drive cellular processes is call chemiosmosis (Campbell 171). C.3.6 Explain the relationship between the structure of the mitochondrion and its function. The mitochondria is specifically shaped so its parts can work together to carry out a function. The Cristae, or multiply foldings of the inner membrane allow for more surface area which therefore allows more of the electron transport chain which means more ATP producing enzymes. The small space between the inner and outer membranes is specifically for the accumulation, or buildup of H+ ions which allows a concentration gradient to be formed. The specific mitochondrial matrix contains all of the enzymes necessary to carry out the Krebs cycle which produces the H+ for the ETC. ...read more.