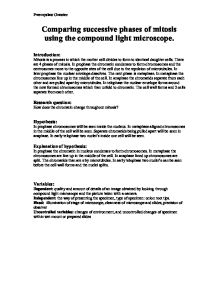 Comparing successive phases of mitosis using the compound light microscope. Introduction: Mitosis is a process in which the mother cell divides to form to identical daughter cells. There are 4 phases of mitosis. In prophase the chromatin condenses to form chromosomes and the centrosomes move to the opposite sites of the cell due to the repulsion of microtubules. In later prophase the nuclear envelope dissolves. The next phase is metaphase. In metaphase the chromosomes line up in the middle of the cell. In anaphase the chromatids separate from each other and are pulled apart by microtubules. In telophase the nuclear envelope forms around the new formed chromosomes which than unfold to chromatin. ...read more.

In anaphase lined up chromosomes are split. The chromatids than are s by microtubules. In early telophase two nuclei's can be seen before the cell wall forms and the nuclei splits. Variables: Dependent: quality and amount of details of an image obtained by looking through compound light microscope and the picture taken with a camera. Independent: the way of presenting the specimen, type of specimen: onion root tips. Fixed: illumination of stage of microscope, cleanness of microscope and slides, precision of observer Uncontrolled variables: changes of environment, and uncontrolled changes of specimen within wet mount or prepared slides Apparatus: Compound light microscope Camera Onion Jar Gauze Rubber band 5mL 6M HCl 2mL Feulgen reagent 5mL 45% acetic acid 250mL beaker 5mL of violet Scalpel 2 Vials Procedures: 1) ...read more.

Place the roots in 5ml 45% acetic acid afterwards. Preparing the specimen: Place the root tip on a clean glass slide. Pure 1 drop of acetic acid on the specimen laid on the glass slide and another drop of violet. Cover it with a glass slide. PROPHASE METAPHASE ANAPHASE TELOPHASE Conclusion: My experiment confirmed the hypothesis that the chromosomes could be seen inside the nucleus in. In metaphase aligned chromosomes could be seen in the middle of the cell, that separate chromatids being pulled apart will be seen in anaphase and that two nuclei's inside one cell will be seen in early telophase. Evaluation: The experiment turned out right. Mitosis could be seen in all stages. The experiment could be improved by using a better camera rather than a low quality one from a cell phone. Przemyslaw Orawiec ...read more.