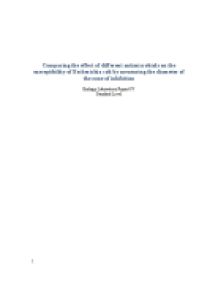 Comparing the effect of different antimicrobials on the growth of E.coli

﻿Comparing the effect of different antimicrobials on the susceptibility of Escherichia coli by measuring the diameter of the zone of inhibition Biology Laboratory Report IV Standard Level ________________ Comparing the effect of different antimicrobials on the susceptibility of Escherichia coli by measuring the diameter of the zones of inhibition ________________ Background information ?Antimicrobial is the name for a chemical that either kills or prevents the growth of microbes ('bugs' or 'germs') such as bacteria, viruses, fungi or protozoa. Some antimicrobials are produced by bugs themselves (e.g. penicillin is produced by the penicillium mould), others are designed in the laboratory. Different bugs are susceptible to different antimicrobials e.g. the penicillium mould is not killed by the penicillin it produces, but some bacteria are susceptible to penicillin.?[1] This experiment is based on the Kirby-Bauer Antimicrobial Susceptibility Test. ?The Kirby Bauer test is a qualitative assay whereby discs of paper are impregnated with a single concentration of different antibiotics. The discs are placed on the surface of an agar plate that has been inoculated with test bacteria. During incubation, the antibiotics diffuse outward from the discs creating a concentration gradient. After 18-24 hours, the zone diameter (zone of inhibition) is measured and reference tables are used to determine if the bacteria are Sensitive (S), Intermediate (I) or Resistant (R) to the antimicrobial drugs.?[2] ?Ampicillin belongs to a class of antibiotics called penicillins that are used for treating bacterial infections.?[3] Penicillins ?stop bacteria from multiplying by preventing bacteria from forming the walls that surround them. The walls are necessary to protect bacteria from their environment and to keep the contents of the bacterial cell together. Bacteria cannot survive without a cell wall. Penicillins are most effective when bacteria are actively multiplying and forming cell walls. Ampicillin is effective against many bacteria including H. influenzae, N. gonorrhoea, E. coli, Salmonella, and Shigella, streptococci and certain strains of staphylococci.?[4] Kanamycin is ?a water-soluble broad-spectrum antibiotic obtained from the soil bacterium Streptomyces kanamyceticus.?[5] It ?acts by inhibiting the synthesis of ...read more.

and between the two other antimicrobials (% of saline solution) separately. This rises the question of the purpose of adding a disinfectant and a stain remover into the experiment alongside with the three antibiotics as no valid comparisons could be made between all of the five substances. In order to avoid this error in the future, all of the concentrations of the substances should be given in equivalent, or at least in comparable units. Another complication arose when some of the zones of inhibition on the petri dishes had merged together and were therefore slightly more difficult to measure. However, this probably did not significantly confound the results as the diameter of the zone of inhibition could be measured from another angel so that the value obtained was still valid. Regardless, for avoiding this potential obstacle in the future, the impregnated filter paper discs should be placed onto the bacterial culture so that the zones of inhibition would not merge. This can be done either by using larger petri dishes, placing a smaller number of impregnated filter paper discs on one petri dish, or reducing the concentrations of the substances the filter paper discs were impregnated with. ________________ [1] City eHealth Research Centre. ?What are Antimicrobials?? Bugs and Drugs on the Web. National Electronic Library of Infection Antimicrobial Resistance Website, 7 January 2004. Web. 17 May 2011. < http://www.neli.org.uk/arfaqs.nsf/c142977c99209f3680256c91003fdf4a/ 11ce1a253cf38dfc80256ca9005d32f9?OpenDocument> [2] Sockett, D. C., Valley, A. ?Antimicrobial Susceptibility Testing,? 14 April 2006. Web. 20 May 2011. <http://www.wvdl.wisc.edu/PDF/WVDL.Info.Antimicrobial_Susceptibility_Testing_at_WVDL.pdf> [3] Ogbru, O. ?Ampicillin, Omnipen, Polycillin, Principen.? MedicineNet.com. Web. 6 March 2012. <http://www.medicinenet.com/ampicillin/article.htm> [4] Ibid. [5] The American Heritage Medical Dictionary. ?Kanamycin.? The Free Dictionary by Farlex: Medical Dictionary. Web. 6 March 2012. <http://medical-dictionary.thefreedictionary.com/kanamycin> [6] Mosby's Dental Dictionary. ?Kanamycin.? The Free Dictionary by Farlex: Medical Dictionary. Web. 6 March 2012. <http://medical-dictionary.thefreedictionary.com/kanamycin> [7] Ogbru, O. ?Tetracycline, Sumycin.? MedicineNet.com. Web. 6 March 2012. <http://www.medicinenet.com/ampicillin/article.htm> [8] ?-? no data was obtained. [9] ?-? no data was obtained. ...read more.