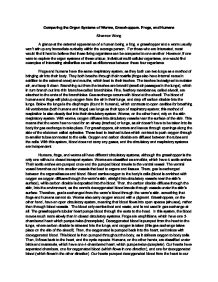 Comparing the Organ Systems of Worms, Grasshoppers. Frogs, and Humans

Comparing the Organ Systems of Worms, Grasshoppers. Frogs, and Humans Shannon Wong A glance at the external appearance of a human being, a frog, a grasshopper and a worm usually won't stir up any immediate curiosity within the average person. For those who are interested, most would find it hard to believe that these living organisms can be compared to one another. However, if one were to explore the organ systems of these unique, individual multi-cellular organisms, one would find examples of interesting similarities as well as differences between these four organisms. Frogs and humans have the same respiratory system, as they both use two lungs as a method of bringing air into their body. They both breathe through their nostrils (frogs also have internal nares in addition to the external ones) and mouths, which lead to their trachea. The trachea is designed to moisten air, and keep it clean. Branching out from the trachea are bronchi (small air passages in the lungs), which in turn branch out into thin branches called bronchioles. Fine, feathery membranes, called alveoli, are attached to the ends of the bronchioles. ...read more.

Then, the carbon dioxide diffuses through the skin, into the environment, as the worm's deoxygenated blood travels through vessels under the skin's surface. Therefore, gas is exchanged from the worm's blood through the worm's skin- something that frogs and humans cannot do. Worms also carry oxygen around with a pigment. Grasshoppers, on the other hand, have an open circulatory system, meaning that blood flows into open spaces (sinuses), rather than through blood vessels. The blood only carries food and waste, and is not used in gas exchange at all. The grasshopper's tubular heart pumps blood through the aorta to the head. In this system, the blood moves much more slowly than in closed circulatory systems. Frogs are amphibians, which have one 3-chambered heart which pumps twice (incomplete). Deoxygenated blood is pumped from the heart to the lungs, where carbon dioxide is released into the lungs, and oxygen is taken (this gas exchange takes place on the site of the alveoli). Then, the oxygenated is pumped back into the heart, as it mixes with deoxygenated blood. This blood is then pumped throughout the body, as it delivers oxygen to body cells. ...read more.

However, frogs have a bony plate in their mouth, called maxillary teeth, as well as two studs, called vomerine teeth to trap their food (insects). The frog's food moves down the esophagus via a series of slow contractions where it also gets lubricated. Then, the food enters the stomach, where stomach acid, bile (produced by the liver and stored by the gall bladder), pancreatic juice (produced by the pancreas), and enzymes break the food down. Then, the food moves into the small intestine, where nutrients are absorbed into the bloodstream. The semi-solid waste is then moved into the large intestine, where excess water is absorbed back into the frog's body. Waste exits through the cloaca. The human digestive system basically works in the same way, except for a few differences. Unlike the frog mouth, the human mouth gnashes food into small particles, because we have more teeth to thoroughly chew with and mechanically break down the food. Humans also have an esophagus, stomach, liver, gall bladder, pancreas, small intestine, and large intestine, which serve the same purpose as with the frogs. However, frogs have longer stomachs than humans, and a shorter large intestine and esophagus than humans. They also have a cloaca, while humans have rectums and anuses to excrete waste. ...read more.