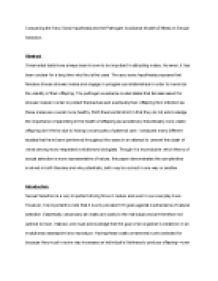 Transfer-Encoding: chunked ﻿Comparing the Sexy Sons Hypothesis and the Pathogen Avoidance Model?s Effects on Sexual Selection Abstract Ornamental traits have always been known to be important in attracting mates. However, it has been unclear for a long time why this is the case. The sexy sons hypothesis proposes that females choose showier males and engage in polygamous relationships in order to maximize the viability of their offspring. The pathogen avoidance model states that females select for showier males in order to protect themselves and eventually their offspring from infection as these males are overall more healthy. Both theories fall short in that they do not acknowledge the importance of parenting in the health of offspring as sometimes, theoretically more viable offspring don?t thrive due to having low amounts of paternal care. I analyzed many different studies that have been performed throughout the years in an attempt to unravel this clash of views among many respected evolutionary biologists. Though it is inconclusive which theory of sexual selection is more representative of nature, this paper demonstrates the complexities involved in both theories and why potentially, both may be correct in one way or another. Introduction Sexual Selection is a very important driving force in nature and even in our everyday lives. However, it is important to note that it is only prevalent if it goes against mechanisms of natural selection. Essentially, secondary sex traits are costly to the individual and are therefore not optimal to have. Instead, one must acknowledge that the goal of an organism?s existence in an evolutionary standpoint is to reproduce. Having these costly ornaments is only selected for because they must in some way increases an individual?s likeliness to produce offspring?even at the cost of survivorship and viability. Two very important mechanisms of sexual selection that are known are the sexy son hypothesis and the pathogen avoidance model. The sexy son hypothesis states that females choose males with showier or more attractive traits in order to select for genes for pathogen resistance in order to pass those ?good genes? onto their offspring. ...read more.

Females were placed in chambers and a recording of the male song would be played. Based on the female reaction to the song, the males were given rankings of attractiveness and the moderately attractive males were removed from the experiment in order to analyze the extremes of attractiveness. The males were then placed independently with many females in enclosures in order to allow them to reproduce. Their larvae were then marked based on their father?s attractiveness and were allowed to grow up under constant conditions. Based on the sexy sons hypothesis, the offspring of the unattractive males should be less viable compared to those of the attractive males. Additionally, it should be expected that the offspring descended from attractive males should also produce songs that were more attractive than those of descendants of unattractive males. However, both of these hypotheses appeared to be false. In fact, there appeared to be a negative correlation between attractiveness of the father and viability of the offspring as fewer attractive descended larvae reached adulthood compared to the unattractive descended larvae. Also, attractive descended grasshoppers did not manage to have more attractive songs compared to the unattractive ones. This shows that the sexy sons hypothesis probably doesn?t apply to this particular species as the attractiveness of the first generation males did not translate into any particular benefits for the next generation. The major drawback to this study, however, was that the grasshoppers were not introduced into large community settings like the mice were in the 2013 Nelson study. In large communities, fitter individuals would most likely have dominated and produced the most offspring and possibly also the fittest. A study performed in 2005 claims to have acquired results that do not support the sexy sons hypothesis like the 2013 Nelson study did. The study performed by Lars Gustafsson and Anna Qvarnstrom showed that collared flycatchers did not inherit sexiness from their fathers. ...read more.

Contrary to the 2015 Lopes study however, this study demonstrated that individuals that were more showy were also more viable as seen in their greater resistance to parasites. In the Lopes study, mice which became sick downregulated their testosterone and darcin levels, indicating a tradeoff between immune response and secondary sex traits. In the Hamilton-Zuks study, however, it was discovered that instead of a tradeoff, the individuals which exhibited greater ornamental traits could afford to do so because of being overall more healthy. Discussion Through analyzing both the sexy sons hypothesis and the pathogen avoidance model, it is inconclusive whether one is more viable than the other as both have their justifications and their weaknesses. For the most part, both theories were backed up by numerous studies. However, instances where certain sons should have been more viable indicated that the sons were in fact less healthy due to other influences such as paternal care and other environmental factors. Additionally, it should be noted that the nature of the secondary sex traits is still unknown. There is either a tradeoff between the ability to exhibit ornamental traits and the ability to remain healthy, or there is no tradeoff and instead, males who are showy are actually overall more healthy. This difference distinguishes between risk vs reward in attracting mates and overall higher quality (survival of the fittest). The value of these traits in attracting mates is undisputed, but to what extent evolution has stressed species into balancing risk and reward is still unclear and is still open to research. Also, the discrepancy of many species who partake in monogamy and those which are polygamous is interesting because it shows that the same theory has many small details branching from it, requiring more specific analysis. In conclusion, both of the theories are backed by strong evidence but what needs to be realized is that there are many factors not encompassed by the theories that have been discovered, with more to likely come. ...read more.