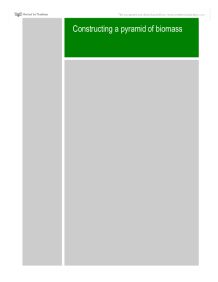 Constructing a pyramid of biomass reportt

Evaluation The experiment, as stated above, was extremely inaccurate due to many factors. The experiment was not accurate because the data was not collected randomly (the quadrat was not thrown randomly, it was placed on a selected area). Also, only one set of data was obtained as the quadrat was only placed and observed once, whereas more samples should have been obtained to get mean values. During the collection of samples, animals might have escaped from the studied area (quadrat 1/4 m ), so the data might be incomplete. Also, not all vegetation was removed - roots should have also been removed - which means that there will be an underestimation of the biomass of the vegetation. Also, the animals collected were not dried due to ethical reasons therefore the biomass will be overestimated. When weighing the envelopes, the weight was constantly changing as the envelopes were bigger than the balance - smaller envelopes should have been used to get more accurate results. The pyramid of biomass was not drawn according to values of dry mass, as the animals were not dried (due to environmental and ethical reasons), which means that values are overestimated and, ultimately, inaccurate. ...read more.