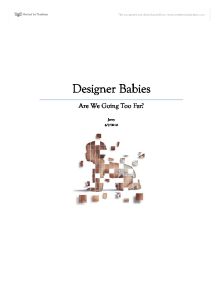 Designer Babies Are We Going Too Far? Jerry 4/7/2010 Years of crossing fingers, grasping hands in prayer, and wishing terribly for a healthy baby boy or girl have, at long last, come to a staggering end. Gratitude befalls fertility clinics all over the world; a faint glimmer of hope has been rekindled to all those unable of conjuring a child naturally, and they may ensure the offspring's health easily enough by simple means of genetic manipulation. But have we trodden on the fine line that is set along the path of morality? Is it time to halt these ongoing scientific proceedings? Before divulging into matters of ethics and varied beliefs, we must first fully understand the operation of developing a 'designer baby'. Quite similar to the renowned vitro fertilization, geneticists are now able to separate the X and Y chromosomes in a donor's sperm sample, allowing the parents the choice of gender by isolating the desired chromosomes. When a male is in demand, the sorted Y chromosomes will be inserted into the woman awaiting fertilization, and the exact opposite applies to the female. ...read more.

It is more than understandable that this poses slightly as Godly behaviour, though the advantages must be reviewed before considering such issues. Not only has this freshly-adopted procedure given us the opportunity of choosing prettily batting blue eyes and cascading golden curls, but has also bestowed upon us the prospect of saving our own flesh and blood from serious genetic maladies. By separating the X and Y chromosomes initially, many X-linked diseases may be averted, providing true assurance that the newly born child will undoubtedly be free from Haemophilia, Duchene muscular dystrophy and Fragile X syndrome. (Designer Babies - TIME.) Limitations ought to be argued well before moving onto implications, in order to enhance the debatable proclamations. Age is of the severest limitations concerning vitro fertilization, if a woman is over the age of forty, she must coherently understand that her chances of success are extremely limited. No different than normal reproduction, an egg has less chance of survival in an aged womb, therefore any parents wishing to undergo vitro fertilization must be aware of the mother's age, ideally it should be under 35 years. ...read more.

Have we been given this gleaming possibility only so we can overthrow the highest of powers, or can we restrict our laboratories to that of mere precaution against genetic diseases? (Designer Babies - TIME.) The most wildly portrayed problem is that of socialistic ponderings. Whether these genetically modified beings will consider themselves above us, who were conceived naturally, or will they belay all that has been done to them and act as if nothing has been administered to their still-growing embryos. If they take the chances of rising above normally grown human beings, then misgivings are sure to arise, and perchance we are deemed inferior life forms, which do not deserve the treatment of a race with such grandeur. Perhaps they will also prove themselves to be quite irksome, whilst admiring their perfect looks and non-existent chances of carrying a genetic disorder. (Designer Babies - TIME.) This subject is horrifically close to the controversial cloning issue, therefore it must be prohibited in cases of obtaining the perfect child. Allowance medically must be granted, however, with strict supervision by the government and lawful restrictions. ...read more.