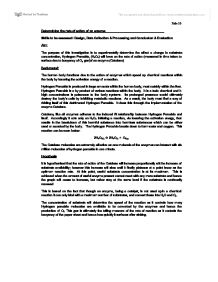 Determining the rate of action of an enzyme (CONCENTRATION)

Determining the rate of action of an enzyme Skills to be assessed: Design, Data Collection & Processing and Conclusion & Evaluation Aim: The purpose of this investigation is to experimentally determine the effect a change in substrate concentration, Hydrogen Peroxide, (H2O2) will have on the rate of action (measured in time taken to surface due to buoyancy of O2 gas)of an enzyme (Catalase). Background: The human body functions due to the action of enzymes which speed up chemical reactions within the body by lowering the activation energy of a reaction. Hydrogen Peroxide is produced in large amounts within the human body, most notably within the liver. Hydrogen Peroxide is a by product of various reactions within the body. It is a toxic chemical and in high concentrations is poisonous to the body systems. Its prolonged presence would ultimately destroy the body's cells by inhibiting metabolic reactions. As a result, the body must find a way of ridding itself of this detrimental Hydrogen Peroxide. It does this through the implementation of the enzyme Catalase. Catalase, like all enzymes adheres to the induced fit relationship between Hydrogen Peroxide and itself. Accordingly it acts only on H2O2 initiating a reaction, via lowering the activation energy, that results in the breakdown of this harmful substance into harmless substances which can be either used or excreted by the body. ...read more.

There was a methodical error in making assumptions about concentration accuracies. It was false to presume that the concentrations marked on the bottles were entirely correct, as well that they had not been tampered with or through other courses been altered. The assumptions were rough approximations based on little evidence; hence they quite possibly are the reason for the slightly skewed results. Also, when conducting the experiment considerations were not made as to the consistent quality of the liver/ Catalase. The condition of the liver was not monitored throughout the process which suggests that the enzymes may have been effect by temperature, humidity, and other outside variables. This could results in the denaturisation of the enzymes which would later be used in the experiment and would skew the results, altering the experiments controlled variable and ultimately providing false results. In the future, to account for these errors, a mass spectrometer should be employed so test the exact concentrations of Hydrogen Peroxide, as well as the quality of the distilled water. More drops of substrate could have been added to provide a clearer result. Rather than a mortar and pestle being used to crush the liver, a blender would be more appropriate to ensure a better consistency and eliminate the effects of a changing enzyme concentration. Finally, the results should be duplicated in order to improve the quality of the mean results and to increase the R2 value of the graph. ?? ?? ?? ?? Feb-10 ...read more.