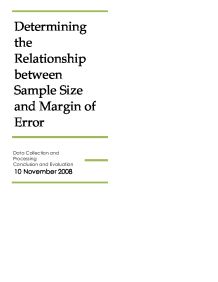 Determining the relationship between sample size and margin of error

Determining the Relationship between Sample Size and Margin of Error 10 November 2008 PURPOSE To determine the effect of sample size on the amount of error in a population estimate obtained by capture, mark and recapture techniques. HYPOTHESIS When comparing two different samples from the same population, the null hypothesis is used. The null hypothesis expects that there is no difference between samples of different sizes. DATA PROCESSING AND COLLECTION The estimated population size was calculated using the Lincoln Index: For all rounds (in all trials) the number of individuals initially caught and markers was 20. In each round, the number of individuals recaptured as well as recaptured and marked differed. Sample population estimate calculation (for trial 1, round 1): Sample 1 (individuals initially caught) = 20 Sample 2 (individuals recaptured) = 10 Individuals recaptured and marked = 1 The actual population size was obtained by counting all members of the population in the sample area. The margin of error between the estimated population size and the actually population was determined by using the formula for percentage error: Sample percentage error calculation (for trial 1, round 1): These calculations have been used to produce Table 1. ...read more.

Other inaccuracies could have occurred because the sample sizes were relatively small. The first sample of 20 individuals in the initial capture (constant for all rounds in the experiment) could have been greater and for the second sample (the recapture sample which varied in each round), a greater number of sample sizes should have been considered to determine how far the trend continues. Lastly, since this experiment was carried out using beans in a container, the shape of the container prevented that sampling from being truly random. The beans on the bottom of the container were covered by many other beans and were rarely chosen in the sampling. To correct this, all the beans could have been laid out on a flat surface, where they would randomly be selected. Although natural human error would still exist, this method would be more representative of a sampling in a terrestrial ecosystem. Therefore, to improve this experiment more trials should be considered, a greater number of samples should be taken and the selection of individuals should take on a flat surface where each individual has an equal chance of being selected. 1 "Sample Size Calculator." 2004. Raosoft. 1 Nov 2008 <http://www.ezsurvey.com/samplesize.html>. ?? ?? ?? ?? 2 ...read more.