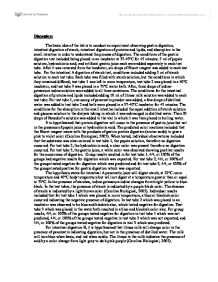 Another improvement that could be made would be to control the room temperature to an exact degree in order to record and control precise results when dependent on room temperature for a condition in a test. A new idea that could be made to this lab would be to test each of the different tests in cold temperatures or conditions to see if that has any affect on the digestion. Conclusion: It is hypothesized that protein digestion will occur in the presence of gastric juice but not in pepsin or hydrochloric acid; pancreatic juice will digest starch at 22�C room temperature and 40�C body temperature but not at temperatures greater than or equal to 75�C; litmus milk will change color in the presence of pancreatin indicating digestion. Furthermore, it is hypothesized that sugar will pass through dialysis tubing but starch will not (Taylor, 2009). Overall, the data supports the hypothesis as it was shown to support 77.50% of the hypothesis statement. I enjoyed this lab because I thought it was interesting to see the entire color changes indicative to the many conditions and factors that went into each test. ...read more.