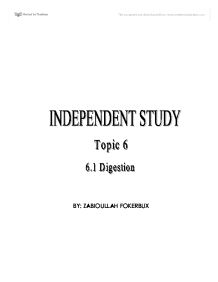 6.1.1- Explain why digestion of large food molecules is essential

Foods we eat are made up of many substances and many of them come from other organisms which exist as large complex organic molecules and sometimes not compatible with our digestive system, thus it is needed to be broken down and put in a suitable form to facilitate the ingestion. Sometimes the food molecules are too large therefore these molecules have to be broken down into small food molecules, which can enter the blood, move around the body (in the blood circulatory system) and enter cells via diffusion or active transport (movement of substances across membranes using energy in the form of ATP (Adenosine Tri Phosphate) where they are needed for a particular function. The action of breaking large food molecules, using teeth is known as the mechanical digestion.

6.1.2- Explain the need for enzymes in digestion

The three main types of food molecule need to be digested are: starch, protein and triglycerides (fats& oil). This is not possible by mechanical digestion thus the use of enzymes can do the work! Enzymes are biochemical catalysts, which speeds up a reaction but does not take part in the reaction. They are made of protein. Enzymes break the insoluble food molecule into soluble food molecule. The process is called chemical digestion. An enzyme breaks down only a particular substance called a substrate and will always produce the same end product. Another feature is that it lowers the activation energy (it is the amount of energy given needed to initiate a reaction. The factors affecting the enzyme reaction are temperature and pH.

6.1.3- State the source, substrate, products and optimum pH conditions for one amylase, one protease and one lipase

6.1.4- Draw and label a diagram of the digestive system

6.1.5- Outline the function of the stomach, small intestine and large intestine

Stomach is where the digestion of the protein takes place. It is catalyzed by pepsin. HCL (hydrochloric acid, pH 1.5) kills almost all the bacteria that you swallow, which can cause food poisoning in the stomach, and provides an optimum pH (acidic pH) for the pepsin to work. Also the digestion of fats (gastric lipase) starts here. Starch, glycogen, and smaller polysaccharides are hydrolyzed into disaccharides such as maltose. Maltose is divided into two simpler molecules of maltase. Large food materials are broken down to small particles to create a large surface area for easier digestion, which is the absorption from the small intestine. The food is held and released at a constant rate. The acidic environment is cause by the production of the HCL and also a secretion which has a luminal pH (1-2).

Small intestine ends the process of digestion. The small intestine has two parts: 1) Duodenum and 2) Ileum. The duodenum is about 25 cm long. The liver secretes bile and it is sent in the duodenum, the bile breaks down the fat into small fat droplets (Emulsification). Pancreatic juice from the pancreas is also sent to the duodenum for the breakdown of the protein, carbohydrate and lipid into amino acid, glucose and fatty acid + glycerol. Villi are found on the surface of small intestine. They arelittle finger-like membrane folds that absorb small molecules, putting them in the circulatory system (sugars & peptides) or the lymphatic system (fats).Each villus contains tiny microvilli on their surface, which increase the surface area of the small intestine. In the ileum, this is where the end products of the digestion are absorbed and from there, the absorbed food is sent to the liver via the hepatic portal vein (formed from the blood capillaries).

Large intestine collects the remaining of the food (indigestible ones) as most of the fluid (90%) are absorbed in the small intestine. The colon removes about 90% of the remaining fluid but some like metabolic waste and inorganic substances are excreted in as salts, they pass through the large intestine to the anus to be passed out as feces. This process is called egestion.

6.1.6- Distinguish between absorption and assimilation

Absorption is the process when the food in the small intestine is passed through the tissues and cells where as assimilation is when the food itself is in use by the organisms in the body.

6.1.7- Explain how the structure of the villus is related to its role in absorption and transport of the products of digestion.