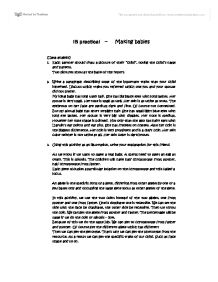 Two pictures show at the back of the report.

My ideal baby has long wavy hair. She has big black eyes with long lashes. Her mouse is very small. Her nose is small as well. Her skin is as white as snow. The eyebrows on her face are medium dark and fine. Of course not connected. But my actual baby has short straight hair. She has small light blue eyes with long eye lashes. Her mouse is very big with dimples. Her nose is medium. However her nose shape is pointed. Not only that she also has hairy ears with Darwin’s ear points and ear pits. She has freckles on cheeks. Also her chin is the biggest difference. Her chin is very prominent and is a cleft chin. Her skin color neither is not white at all. Her skin color is dark brown.

Each gene occupies a particular location on the chromosome and this called a locus.

An allele is one specific form of a gene, differing from other alleles by one or a few bases only and occupying the same gene locus as other alleles of the gene.

In this activity, we use the two coins instead of the two alleles, one from mother and one from father. One is dominate one is recessive. We can set the side with the face be dominate, the other side be recessive. Then we throw the coin. We can get the allele from mother and father. The percentage will be same if we do the coin or mitosis – 50%.

Because of this we do the same job. We can get to chromosome from father and mother. Of course get the different allele which has different

Allele is the different form of same gene. Such as the face shape, the gene is same. They both carry the face shape. But they can be R or r.

Such as Darwin’s Earpoints present DD. DD is homozygous.

Genotype is the genetic make up, such as the eye size the gene shows Ee. Ee is the genotype.

For the face shape Rr or RR will be round face. R is dominant.

Phenotype likes the catachrestic. Such as face shape is round. Hair type is straight and so on.

For the face shape Rr or RR will be round face. Bur rr will be square face. So r is recessive.

Such as mouse size Mm will be average. Mm is heterozygous.

The percentage to get the head side or the other side is both 50%. Because of parent’s genotype is heterozygous. For the meiosis it will has 2 stages, meiosis 1 and meiosis 2. First it will have two identical daughter cells which have same chromosome number.  Then it will have 4 non-identical daughter cells which contain 2 chromotids. The chance of those 4 chromotids in meiosis will have 50% to get in meiosis 2. So the percentage will be same.

Because the probability of getting one allele of a pair is random you can not make sure it will be exactly 50%. The chance for the daughter cell can be over or less than 50%.

The coin do the same job. If you filp coin twenty times you will not get exactly 10 times heads or 10 times tails. The pecentage will chage a little bit. It will not stay exactly same percentage.

For example the face shape. There are two alleles control this catachrestic, R and r. They are different form of same gene. The parents are both heterozygous Rr. But when the meiosis happens the allele with R and r will randomize give to their children. We can use a punt square to prove this. That’s why both parents are round face but their children could be square face.

In this law alleles are randomly assorted into each gamete. For example the gene which control face shape and nose shape will not mix together when the meiosis happen.  The allele controls face shape will separate while meiosis. But the allele controls the nose shape can stay with the face shape. They can get together. Each trait will not influence other traits. Each trait is independent. A baby has straight hair do not have to have square face and so on. Hence it can support the low of Independent Assortment.

Yes it does. In this activity, we suggest both parents will be hetrezygous. We flip the coins instead of the meiosis. By fliping the coin, it creats the same probability as getting one allele of a pair and also relates to the same probability of inheriting genetic condition. Although it is only a game to create our baby. But it can represent the real life. It support Mendel’s first and second law – low of segregation and low of Independent.

The very prominent chin shape, connected eyebrow and the hairy ears. The first two looks ugly. Nowadays people like beautiful things. They hate ugly things. They also hope themselves to be beautiful. So people do not like ugly things include me.  The hairy ears make me feel queasiness. This come from the movie and the personal thinking. Parents alwys want their children to be beautiful and cute. They won’t hope their childre to be stranger and ugly.