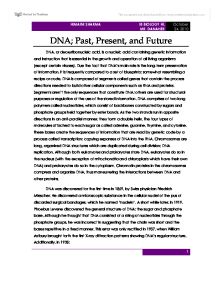 DNA; Past, Present, and Future

DNA; Past, Present, and Future DNA, or deoxyribonucleic acid, is a nucleic acid containing genetic information and instruction that is essential in the growth and operation of all living organisms (except certain viruses). Due the fact that DNA's main role is the long-term preservation of information, it is frequently compared to a set of blueprints; somewhat resembling a recipe or code. DNA is composed of segments called genes that contain the process directions needed to build other cellular components such as RNA and proteins. Segments aren't the only sequences that constitute DNA; others are used for structural purposes or regulation of the use of the stored information. DNA comprises of two long polymers called nucleotides, which consist of backbones constructed by sugars and phosphate groups held together by ester bonds. As the two strands run in opposite directions in an anti-parallel manner, they form a double helix. The four types of molecules attached to each sugar as called adenine, guanine, thymine, and cytosine. These bases create the sequences of information that are read by genetic code by a process called transcription; copying expanses of DNA into the RNA. Chromosomes are long, organized DNA structures which are duplicated during cell division; DNA replication. Although both eukaryotes and prokaryotes store DNA, eukaryotes do so in the nucleus (with the exception of mitochondria and chloroplasts which have their own DNA) ...read more.

An additional application of DNA fingerprint technology is the diagnosis of inherited disorders in adults, children, and unborn babies. The technology is so powerful that, for example, even the blood-stained clothing of Abraham Lincoln could be analyzed for evidence of a genetic disorder called Marfan's Syndrome.2 As mentioned in this passage, DNA fingerprinting is the most utile advances in microbiological technology today. It is a laboratory procedure that uses DNA-modifying enzymes, such as nucleases and ligases. Nucleases are enzymes that cut DNA strands by catalyzing the hydrolysis of the phosphate-ester bonds. The most frequently used nucleases are the restriction endonucleases, which cut DNA at specific sequences. Naturally, these enzymes prevent phage infection in bacteria by digesting the phage upon entry. In science, they are used in molecular cloning and DNA fingerprinting. Ligases carry out the opposite functions; they reform cut or broken DNA strands. They are used to join together short segments of DNA to replicate a complete copy in DNA repair and genetic recombination. DNA fingerprinting requires five steps: 1. Isolating the DNA; only a small amount of tissue is needed. 2. Cutting, sizing, and sorting the DNA via nucleases (EcoR1); the DNA pieces are then sorted according to size by a sieving technique called electrophoresis and passed through agarose (seaweed gel). 3. Transferring the DNA to nylon; the nylon sheet is placed on the gel and soaked overnight. ...read more.

Prokids Scientific Group Meeting, an organization that has agreed to a series of commitments to foster international partnerships for joint action against human trafficking. They work towards obtaining DNA samples from kids found outside their families; victims of prostitution, forced labor, militants activities, and illegal adoption, and creating DNA profiles to store in an international database where they can be searched against the DNA profiles provided by families who have their children kidnapped or lost. In the long run, this movement will help reduce the global crime of human trafficking, and thus improve safety. Therefore, it can be concluded that DNA is already used to work towards a better future, and will come to play even more beneficial roles in the actual future. In conclusion, DNA has a variety of different uses in the present, and will have great uses in the future. However, none of this could have been possible without the various discoveries made in the past. If DNA's role in heredity wasn't discovered, it would be worthless to us today. Although we, in a very human manner, assume that all that needs to be discovered about DNA has been discovered, it may not be so and its uses may change radically in the future. However, we know for certain that DNA is not potentially harmful in any way as it occurs naturally. All in all, it has furthered science a lot, and will keep doing so in the future. ...read more.