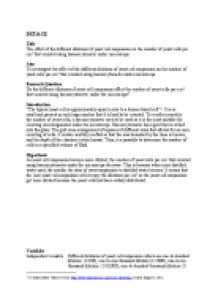 Do the different dilutions of yeast cell suspension affect the number of yeast cells per cm3 that counted using haemocytometer under the microscope?

1. Loading the haemocytometer 1. The yeast cell suspension is gently shaken and well stirred to ensure the suspension is properly mixed. 2. The end of capillary tube is inserted into the suspension and risen the liquid into the tube. 3. The end of capillary tube is run along the edge of the cover slip between the arms of the ?H?. The area between the cover slip and the top half of the ?H? is filled with the suspension. 4. The slide is turned through 180O and repeated for the opposite edge of the cover slip. 5. The haemocytometer is placed on a damp tissue in a petri dish for at least two minutes to equilibrate. 1. Counting the cells 1. The haemocytometer is placed on the microscope stage. 2. The grid lines of the haemocytometer are focused using the 10X objective of the microscope. 3. The numbers of cells in the area of primary squares are counted using a hand tally counter. 4. The haemocytometer is moved to another primary squares and the counting is carried on until all 4 sets of primary squares are counted. 5. Steps 1-12 are repeated using each of the serial dilutions. 6. The number of yeast cells in the original yeast suspension into cells/cm3 is estimate. Quantitative Data Test tube Dilutions of yeast suspension Number of yeast cells per cm3 that counted using haemocytometer under microscope. ...read more.

Conclusion The number of yeast cells per cm3 that counted using haemocytometer under the microscope decrease when the yeast cell suspension becomes more diluted. This means that there is a larger proportion of water compared to yeast suspension, which explains why there are less yeast cells per cm3 in a diluted suspension. Thus the hypothesis is accepted. Evaluation Limitation and Weaknesses 1. The yeast cells did not spread equally in the central main grid of haemocytometer. Therefore, the result obtained is not precise and not reliable. 2. The process of counting the yeast cells under the microscope is not repeated. 3. The counting of yeast cells that touched the chosen two grid lines are not consistent in every observation. Some observation used the top and right grid lines while the other observations used the bottom and left grid lines. Suggestion 1. The yeast suspension must be stirred thoroughly before being dropped into the haemocytometer. This to ensure that the cells would spread equally and consistently in the haemocytometer. 2. The counting should be repeated at least three times to get certain yeast cells counted by calculating the average of the counting from each observation. 3. Only two grid lines should be considered as the area for counting the yeast cell. It is either top and right lines or bottom and left lines. ________________ [1] I S Dept (2006). What Is Yeast: http://www.dakotayeast.com/yeast_what.html, visited August 3, 2012. ...read more.