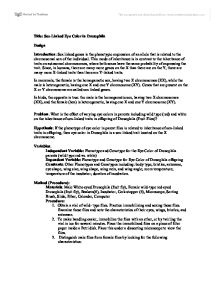 10. Calculate the proportions of each phenotype. Control of Variables: I will control the independent Variable, phenotype and genotype for the eye color of Drosophila parents (wild type red vs. white) in order to see its effect on the dependent variable, phenotype and genotype for eye color of Drosophila offspring, by maintaining several constants. I will ensure that eye color is the only trait being manipulated through careful analysis of each parent fly under a microscope prior to mating. I will consequently discard any fly with a mutation other than eye color such as, body type, bristles, antennae, eye shape, wing size, wing shape, wing vein, and wing angle. I will keep all growing larvae/eggs in the incubator for two weeks in order to ensure equal exposure to heat upon each mating. Additionally, I will maintain the same heat for all incubations in order to prevent fluctuation in the rate or quality of growth. Method for Sufficient and Relevant Data Collection: In order to collect at least ten sufficient forms of raw data, I will perform 4 crosses: Cross #1 yielding 2 values, Cross #2 yielding 3 values, Cross #3 yielding 4 values, and the Control Cross yielding 2 values for a grand total of 11 entries of raw data. The data for each cross will be divided by males and females in order to discern proportions indicative of a sex-linked trait (gene located on the X chromosome). ...read more.

Thus, the reasoning for my results is due to the fact that the gene for while eyes in Drosophila is located on the X chromosome and not the Y chromosome. Genes on the X chromosome that determine a trait are called sex linked. After I understood the white-eye trait is recessive to the red-eye trait, I easily noticed that my results follow Mendel's assortment of chromosomes. The procedure was near flawless in terms of collecting sufficient data. The progression of each cross lead up to the final cross between the first generation female and the parental generation male which yielded the 1:1:1:1 phenotypic ratio explicative of a sex-linked trait in comparison to the previous cross. However, in terms of relevant data, the control group served no purpose and did not support nor negate my hypothesis. Overall, the limitation of the lab in a real-life setting rather than a computer would be the inconvenience of breeding all of the flies in such a short amount of time. Possible improvements in procedure would be to remove the control group completely because all variables are sufficiently controlled and the data derived from the control group itself is irrelevant and extraneous. Furthermore, the counting of the flies could be executed in a more quantifiable manner in which exact measurements by device are implicated, perhaps by weighing total mass of the flies and dividing by the total number to attain an average weight. ...read more.