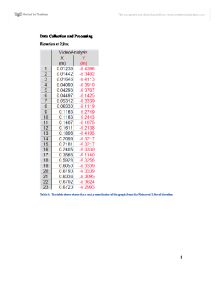 Logger Pro is a software usually to analyze videos in a slow pace. Yet, in this age in time it would be a good way of using it for the lab except for the fact that its y-coordinates for each of the elevations' data is always negative. This would create another problem; when for example two individuals of the same kind were on the same x or y-axis and respectively different for the other, it would have an impact on the graph. Moreover, numerous improvements could be made for next time in order to make the lab better. When different pictures were taken at different elevations, and as the photos move both vertically and horizontally, it should rather just move vertically so that the same type of species and/or organisms can be examined. Better software can be used to analyze data such as this in order to make the results better and more understandable. In order to obtain better results, or maybe do a more in-depth research, more transects could be analyzed. ?? ?? ?? ?? 1 ...read more.