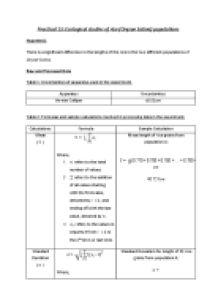 This could be done by bringing small sacks of rice and choosing from there, rather than from a small container. 2. A grain grader could also have been used to ensure that all the rice grains used in the experiment were not damaged. This will help to increase the precision of the values as well as the accuracy. Step 3: Measure the length of each of the 30 grains to the nearest 0.005 mm and record the length using a vernier calliper. 1. The vernier calliper is very big compared to the rice grain and hence it is difficult to use it to measure the length of the rice grain, as applying too much pressure may damage the rice grain, affecting the observed value, and also it was very tedious putting the rice grain between the teeth of the vernier calliper. 2. Also, the only characteristic measured in the experiment was grain length. This limited the study to only one phenotype and does not conclusively show whether there is a significant difference in the rice grains from the two populations. 1. A micrometer screw gauge could be used instead. It is more suited for small items like rice and hence will also provide more accurate readings. 2. Other visual characteristics, such as mass, and grain texture could have been compared so as to give further examples of the presence of quantitative distribution as well as making the comparison between the two populations more conclusive. ...read more.