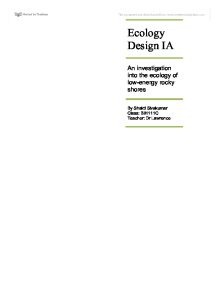 Ecology Design IA An investigation into the ecology of low-energy rocky shores By Shakti Sivakumar Class: BIH111C Teacher: Dr Lawrence RESEARCH QUESTION: How does the amount of sunlight exposure alter the amount of gastropods that are stuck to rocks on the lower intertidal low-energy rocky shore? BACKGROUND INFORMATION Rocky intertidal shores contain a variety of organisms many of which are gastropods, organisms whose main feature is their muscular foot, which is their only source of transport. A number of gastropods that can be included in the investigation may be: * Constricted top snail * Hercules mudwelk * Striped mouth periwinkle These species, and many more may be present at the experimental site and can be recorded for results. Snails, as well as many other gastropods produce a sticky mucus through their muscular leg that allows them to travel seamlessly over sharp surfaces. This mucus also allows the organisms to adhere themselves to the surface in order to ingest food or to excrete. The substance that sticks to the surface is known as an epiphragm, "a closing membrane or septum (as of a snail shell or a moss capsule)" (Mariam-Webster, 2011) which is essentially dried mucus. The epiphragm also allows the organism to abstain from water loss and to retain as much moisture as possible, which would be useful when in a area of high heat or low water content. ...read more.

* 0700 hours * 0800 hours * 0900 hours * 1000 hours * 1100 hours * 1200 hours * 1300 hours * 1400 hours * 1500 hours * 1600 hours * 1700 hours * 1800 hours * Sunset * 1900 hours (or when sun has completely gone over horizon and no natural light is available) 3. Conduct steps 1 and 2 on a day with similar temperature of the environment, tide height, water salinity, pH of the water and the weather of the site, however at the same site RISK ASSESSMENT Risk Steps to avoid Action to take if occurs Oyster cuts Remain cautious when recording data on the rocky shore, and watch footing Administer antiseptic and apply band-aid to absorb bleeding Being pulled out to sea by high tide Don't conduct experiment near or during a time where there is a rip in the sea Continue waving until a person of authority comes and assists. POSSIBLE METHODS OF STATISTICAL ANALYSIS Due to the data being continuous, a trend according to the number of gastropods counted verses the time of day may be presented. Due to conducting the experiment five times, an average for each time may be found. As well as providing a trend on how many gastropods are found, this also gives an indication as to if gastropods prefer sunlight to shade, which immediately gives indications of their adaptations to that environment. ...read more.