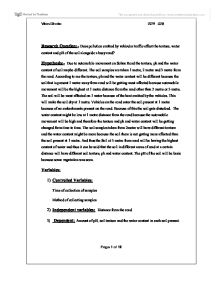 Conclusion: My analysis does not support the hypothesis. The pH is almost the same at every level. The ph is basic as mentioned in the hypothesis. The soil texture hypothesis is proved right as the texture of the soil is different in all cases. The water content of soil is high at close distance and very low at distance from sohna road . The soil sample near to the road has more ability to hold moisture because of the fine soil particles as compared to the coarse sandy soil which has better aeration but poor water holding capacity. Errors and Improvements:- 1) The pH of the soil samples taken is not appropriate. Only one reading of each soil sample has been taken which is not appropriate. 2) At least five reading of each soil sample could have been taken. 3) The Temperature in those 3 areas from where the soil sample was taken could have been measured. 4) The Time taken to conduct the experiment should not have been much because of the air would dry the loose soil and thus appropriate readings will not come. 5) Light intensity could have been measured on all the three places from where the soil sample was taken because light is directly proportional to heat. 6) In the experiment to check for texture after 48 hrs the soil was not shaken well and the soil profile was not in a straight line so the readings were difficult to take. ?? ?? ?? ?? Vikas Dhaka 2279-028 Page 1 of 12 ...read more.